What does 'shebang' mean?

The word appeared out of nowhere with multiple meanings

Lexicographers have been puzzled by the origin of the rather odd word shebang since its appearance in the English language during the American Civil War. The word has no obvious antecedents, and it appeared with several different meanings used roughly around the same time. In its early years, shebang could refer to such dissimilar things as a type of dwelling, a vehicle, or a drinking establishment, or it could be used in a general sense for the entirety of something, as in the common phrase "the whole shebang." 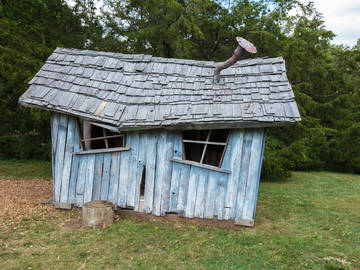 'Shebang' entered English around the time of the Civil War and has been used to refer to a type of dwelling, a vehicle, or a drinking establishment. Though theories abound, no one is entirely certain where the word comes from.

Usage evidence indicates that the word may have been first used in reference to a type of crude shelter. Walt Whitman used the word in that way in Specimen Days, a prose work of "diary-jottings" and "war-memoranda" from 1862 to 1865, in which he writes of the terrible conditions of the soldiers living in "shebang enclosures of bushes" and of soldiers coming "out from their tents or shebangs of bushes." In addition, there is evidence from around the same time of the word being applied to a hut, shed, cabin, and other types of buildings, including inns and taverns. Considering these similar applications, one might think that the story of shebang is a straightforward one concerning a word originating as a name for types of small buildings or dwellings. However, another early use of shebang was for a vehicle, which makes one wonder about the exact origin of the word and how its two very different senses came about almost simultaneously. Mark Twain used shebang for a vehicle in his novel Roughing It.

You're welcome to ride here as long as you please, but this shebang's chartered.
― Mark Twain, Roughing It, 1872

Some etymologists surmise that the application of the word for a type of building may have been influenced by an Irish or French word. In Irish, síbín means "illicit whiskey" and is the source of shebeen, a word used in English for an unlicensed or illegally operated drinking establishment that is older than shebang by a century or so.

A little country ale-house, or in Irish parlance, shebeen, which stood at the meeting of four bleak roads.
― Charles Lever, Charles O' Malley, 1841

In French, chabane means "hut" and it has been speculated that shebang is a corruption of the word, which could have been familiar to Civil War soldiers from Louisiana. Both are certainly plausible origins of the "building" sense of shebang, but they are unsubstantiated. As for the "vehicle" sense of the word, in French char-á-banc refers to a carriage or coach with benches. It has been suggested that shebang is a mangling of that word, but evidence, again, is lacking.

Another mystery of shebang is its vague general sense referring to everything that is involved in what is under consideration, which is first recorded around the same time as the "building" and "vehicle" senses of the word. In a 1869 letter to his publishers, for example, Mark Twain writes, "I like the book, I like you and your style and your business vim, and believe the chebang will be a success." It has been conjectured that this use is a generalizing of shebang, taking the idea of a building or vehicle and its contents as a whole entity and extending it to the entirety of other things. Whatever the case, shebang took on an additional meaning leading to the familiar phrase "the whole shebang."

Given that the Irish term shebeen was being used about a century prior to shebang, it is tempting to consider shebang as developing from shebeen. It would, after all, give some insight into the the word’s "building" and "tavern" meanings. Truth be told, however, there is no verifiable linguistic trail between shebeen and shebang, which means that the sudden emergence of shebang with its multiple various meanings in immediate currency remains a lexicographer’s puzzle.