'Piano': Its Name Is Only Half the Story

The soft and loud of it all

As a dictionary, our beat is words, not the history of musical instruments. But in the case of the word piano, we must start with the object itself. 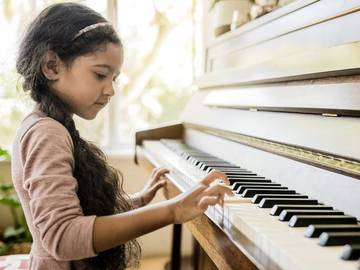 We begin at the dawn of the 18th century. Wigs are big, and the harpsichord is the darling of the European musical world. It's written for by all the best composers and played at all the best parties. (According to Encyclopedia Britannica, it also has the fabulous distinction of possibly having its origin in devices invented by medical astrologers to investigate the effects of cosmic musical harmonies on the human body. So.) If you had to be a musical instrument in 1700 the harpsichord would be the one to pick. Unless you knew what was coming.

It turns out not everyone thought harpsichords were the bee's knees. Bartolomeo Cristofori, an Italian living in Florence, didn't like the fact that no matter how gently or forcefully you pressed the keys of the harpsichord the result was basically the same: a mechanism would pluck the strings inside and the notes would sound at a uniform volume and for a uniform length of time. You just couldn't achieve fine gradations of loudness or sustain a note. And if you can't achieve fine gradations of loudness or sustain notes, well, you just can't emote, man.

Cristofori knew there had to be a better way. By 1709 he had an invention that was like the harpsichord but that could actually respond to some serious banging. There was no insipid plucking of strings as by an assemblage of tiny angels beset by ennui. In Cristofori's creation the strings were instead struck by hammers, as if an army of wee Thors were mustered and ready to smite or, if need be, merely tap.

However brilliant Cristofori was, it cannot be said that branding was in his skill set. He called his new instrument gravicembalo col piano e forte, that is, "harpsichord with soft and loud." The name was forgettable enough that the earliest known pieces written expressly for the instrument were identified by the composer as being for the cembal di piano e forte detto volgarmente di martelletti: "the soft and loud harpsichord commonly called the one with little hammers." Oh right, that one.

The instrument was not held back by its unwieldy and derivative name, however. It was in a few short decades being produced all over Europe, and with its popularity came some pruning of lexical excess, with everyone agreeing to drop the part about the tired old harpsichord and just keep the exciting "soft and loud" bit. Piano e forte eventually led to piano in the English language by the 1770s. The word was in musical spheres already a familiar one: piano has been used in English as a direction in music to mean "at a soft volume" since the late 17th century. Of course, forte too was already a word in its own right, having the meaning "at a loud volume." We don't know why, other than Cristofori's mentioning it first, it was the instrument's capacity for soft sounds that took primacy. Maybe everybody at those harpsichord parties had been wishing all along that the thing would tone it down already.