The two most basic words used to mean “drained of strength and energy,” tired and fatigued, occupy time-honored parallel positions, so typical in English, as respective Old English- and Latin-derived words that are nearly synonymous. 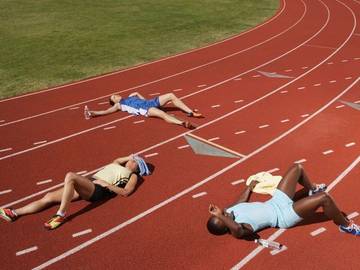 'Fatigue' is often used to express medical or clinical specificity, such as "muscle fatigue."

As is usually the case, the word from Old English, tired, is the most frequent household, familial choice, and tends to be used in a straightforward way both in literal and figurative contexts:

They are tired of hearing the same excuses.

The word derived from Latin, fatigued, can be used with these meanings but is also used to convey a medical, clinical, or technical specificity to tiredness. Fatigued and the noun fatigue, for example, are the terms used when discussing symptoms of illness:

When that happens, the shortage of red blood cells, known as anemia, causes the body to feel fatigued, according to the Mayo Clinic.
— S. Wayne Carter, Jr., The Baltimore Sun, 4 February 2018

After just six weeks, those in the exercise group showed significant improvements in balance, fatigue and dizziness, compared with those who hadn't gotten the workouts.
— Chicago Tribune, 7 February 2018

They are also used when referring to the weakening of building materials:

The company planned to reposition the farm to lessen the forces of drag on the structure that it already had identified as its top priority for replacement because of metal fatigue and corrosion.
— Lynda V. Mapes, The Seattle Times, 28 January 2018

Indeed, fatigue is most often paired with words that express medical or psychological conditions:

Other terms feel technical or even legal, like driver fatigue or voter fatigue. Nevertheless, fatigue is also a very basic part of today’s vocabulary, not limited to medical or legal use. What’s interesting about fatigue is that, for such a common word, it only dates back to the mid-17th century in English—it’s not used even a single time by Shakespeare or in the King James Bible. The fact that it’s more frequent than tiredness in today’s usage isn’t really surprising, since tiredness is in fact not much older than fatigue, dating back only to the mid-16th century. The noun commonly used for “the state of being tired” prior to 1600 (and indeed for many years thereafter) was weariness, a term we might associate today more with metaphysical fatigue—emotions and moods—than with physical fatigue. Both of these meanings of weary were used from the beginning, but Shakespeare used it to mean “physically tired” or metaphorically “tired of” about twice as often as he used it to refer to a depleted emotion or mood (think world-weary). Today weary is often used to convey emotional exhaustion, sometimes in a slightly poetic or ironic way:

I grow weary of his constant complaining.

It’s notable that both Samuel Johnson and Noah Webster used weary to define both tire and fatigue in their dictionaries.

Early uses of fatigue often were in military contexts:

…the fatigue of our long March, and the night intervening, prevented our very farre pursuit of them in a strange Country…
—Gamaliel Dudley, A true copie of Colonel Sr. Gamaliel Dudley's letter to His Highnesse Prince Rupert from Newark, 1644

There they stood facing each other an houre or two, till the Colonell perceived his Squadrons of Horse to grow thin, many of them slincking away by reason of the extreame fatigue and fasting, wherewith most of them both Horse and Men were opprest.
—Edward Walsingham, Alter Britanniae heros: or The life of the most honourable knight, Sir Henry Gage, late Governour of Oxford, epitomiz'd, 1645

… wherein verily I have taken so great delight, that the exercise of Arms, could never divert me from so noble an employment, which hath alwaies been to me a well-pleasing recreation amidst the fatigues of war.
—Henry Estienne, The art of making devises treating of hieroglyphicks, symboles, emblemes, aenigma's, sentences, parables, reverses of medalls, armes, blazons, cimiers, cyphres and rebus, translation by Th. Blount, 1646

Fatigue came to English from French and ultimately derives from the Latin verb fatigare, meaning “to tire out” or “to exhaust.” Interestingly, it displaced an earlier direct borrowing into English from Latin, fatigate, which was used in the 1500s before disappearing (it’s now labeled obsolete in our dictionaries). Fatigue entered English first as a noun, then the verb (“the work fatigues me”) and adjective (“a fatigue detail”) came along. The noun was used to mean both “the state of being tired” and “labor,” “effort,” or “trouble”—a sense that seems old-fashioned today. Early uses with this meaning were often in the plural:

These senses led to two military-specific uses of fatigue. First, it came to mean “manual or menial work performed by military personnel,” and then, consequently, “the uniform or work clothing worn on fatigue detail and in the field.” This is how fatigues came to mean “uniform” in the military. When your job seems to be all work and no play, even your clothes get tired.