The English language contains some word origins which stare us in the face, yet trace a path that seems so improbable that we never make the connection on our own. For instance, the way in which a word for the younger son of a French noble ended up as cad (“a man who acts with deliberate disregard for another's feelings or rights”)….um, well, some people might not find that to be such a surprising turn of events. But even if you have a low opinion of younger sons in the French nobility this etymology should be surprising. 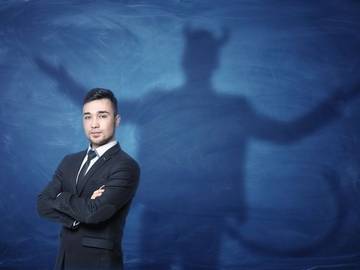 An early sense of 'caddie' is “one that waits about for odd jobs,” which is thought to have given rise to 'cad.'

A dialect in fifteenth century France used the word capdet (“chief” or “captain”) to refer to Gascon officers serving in the court at that time. As many of these officers were the younger sons of Gascon families the word came to be used, along with cadet, to refer to a younger son or brother. The English language borrowed both the military and the familial senses in the 17th century.

A cadet or yonger-brother of a good house, having had for his appanage a Lordship, by whose name he hath beene knowne and honored, cannot well forsake and leave the same ten yeares after his death.
— Michel de Montaigne (trans. by John Florio), Essays, 1613

….because his Daughter La Pratiere is his only child and heire, and Valfontaine but a Cadet (or younger Brother) therefore covetousnesse makes him assume this resolution, that hee will have none of him for his Sonne in Law.
— John Reynolds, The Triumph of Gods Revenge, 1635

The old Duke did so, and coming to the Palace to appear before the Parliament, a ruffling company of Souldiers and Cadets follow'd him who did some acts of insolency against the Lawyers by kicking them with their spurs in the Hall where none should come spurr’d.
— James Howell, Lustra Ludovici, 1646

Caddie came into English in the 17th century as well, mostly found in Scotland as a variant of the military sense of cadet. This word has enjoyed a range of meanings over the centuries, including “one that waits about for odd jobs,” and “a young fellow.” The most common sense of caddie found today, “one who assists a golfer especially by carrying the clubs,” came about in the middle of the 19th century.

The caddie is a servant who carries the bundle of clubs required by the golfers, and who is also in general qualified, by his skill in the game, and his local-knowledge, to give directions to his employer.
— Chamber’s Edinburgh Journal, 4 Mar. 1848

The “person who waits about for odd jobs” sense of caddie is thought to have given rise, in the early 19th century, to cad, which was used among students at British universities to refer to “a permanent inhabitant of a town as distinguished from a student at a local school.” The ostensible lack of proper manners exhibited by these cads helped nudge the word toward its current sense.

That’s how tricky and sneaky our language is: even when it looks like the path from “younger son of a member of a French noble” to “person who may not have my best interests at heart” is rather direct, we find that the path is littered with additional meanings and etymological meanderings.