The Real Story of 'Fake News'

Fake news is having a bit of a moment.

The Kremlin has denied meddling in the campaign. It also said this week that a French media report alleging Fillon was paid to arrange introductions to Putin was "fake news”.
—Reuters.com, 23 Mar. 2017

Wenger yesterday denied that he had been offered a contract by Paris Saint-Germain. The Arsenal manager told BeIN Sports: "It is a false rumour, that is what you call 'fake news'. I formally deny it. It is not true.”
—Paul Hirst, The Times (London, UK), 22 Mar. 2017

Fake news is frequently used to describe a political story which is seen as damaging to an agency, entity, or person. However, as seen in the last of the three citations given above, it is by no means restricted to politics, and seems to have currency in terms of general news. 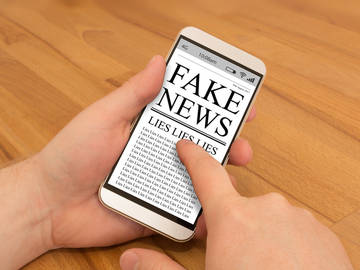 The printing and dissemination of spurious news is hardly new, but the term fake news is. However, when we say that an English word is “new,” we are using a broader meaning of that word than if we were to refer to, say, a musical genre. Fake news appears to have begun seeing general use at the end of the 19th century.

Secretary Brunnell Declares Fake News About His People is Being Telegraphed Over the Country.
—Cincinnati Commercial Tribune (Concinnati, OH), 7 Jun. 1890

Fake News. The following is handed to us for publication: Sunday’s Enterprise says that I and a companion were run over by the Neptune and thrown into the water. As can be proved by more than one, we did not so much as get our feet wet, nor were we helped into the Neptune. Clarence Collins.
—The Kearney Daily Hub (Kearney, NE), 7 Jul. 1890

The public taste is not really vitiated and it does not in its desire for ‘news’ absolutely crave for distortions of facts and enlargements of incidents; and it certainly has no genuine appetite for ‘fake news’ and ‘special fiend’ decoctions such as were served up by a local syndicate a year or two ago.
—The Buffalo Commercial (Buffalo, NY), 2 May 1891

One of the reasons that fake news is such a recent addition to our vocabulary is that the word fake is also fairly young. Fake was little used as an adjective prior to the late 18th century. But we obviously had fake news before the 1890s, so what did we call it? There was doubtless a wide range of expressions that people have resorted to when they felt the need to indicate that the newspapers had been fibbing, but one of the most common ones was false news. We can see this collocation in use as far back as the 16th century.

Other thinges are in this Court at a good price, or to say it better, very good cheap: that is to wit, cruel lies, false news, vnhonest women, fayned friendship, continuall enimities, doubled malice, vaine words, and false hopes, of whiche eight things we haue suche abundance in this Courte, that they may set out bouthes, and proclayme faires.
—Antonio de Guevara, The Familiar Epistles of Sir Anthony of Gueuara (trans. By Edward Hellowes), 1575

If, however, Mr. B. should appear, and not forfeit his recognizance, then that the writer has been guilty of “spreading false news,” contrary to law, “no rational man can doubt.”
—Impartial Observer (Richmond, VA), 9 May 1807

The French press knows little, and under laws which punish "false news," and render a journal liable to suppression if it displeases the executive power, is naturally afraid to say what little it knows.
—The Detroit Free Press, 20 Sept. 1866

So now we know that fake news has been in use for over a century, has increasingly widespread use, and has a consistent meaning: does this mean that it is a word we are watching? Er…not really.

The reason fake news is unlikely to be entered in our dictionary anytime soon is that it is a self-explanatory compound noun — a combination of two distinct words, both well known, which when used in combination yield an easily understood meaning. Fake news is, quite simply, news (“material reported in a newspaper or news periodical or on a newscast”) that is fake (“false, counterfeit”).

While there are many other such compound nouns (such as compound noun) that we do not define, there is a way for fake news to make its way into the dictionary. All it has to do is take on a specific and commonly used meaning that is independent of the meaning of fake and news. For instance, dirtbag long ago had the meaning of “a bag for putting dirt into,” and was not entered in many (if any) dictionaries. However, once it took on the figurative meaning of “a dirty, unkempt, or contemptible person” it began being seen as a worthy candidate for definition.

And speaking of adding new words to the dictionary: did you know that all the lexicographers in North America and Britain have a competition every year to see who can add the most inappropriate word to their dictionary? The winner receives $1000, but more importantly, is also granted the right to remove one word from all the dictionaries that take place in this competition.