Who doesn’t love lobbyists? Oh. It turns out that many people do not, in fact, have great admiration, let alone love, for the lobbyist. Let us rephrase that question: who doesn’t love etymology? (We assume you're all cheering very loudly for etymology right now. We'll wait.) Just for you, our dear excitable reader, we are going to lay out the history of the word lobbyist. 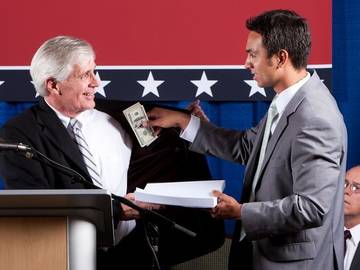 Lobbyist is not a very old word, less than 200 years old, yet in that time it has already managed to create confusion and false impressions. One explanation that has often been proposed for its origin is that it comes from the Willard Hotel in Washington DC.

Dating back to 1850 and known for off-the-record conversations in a city famous for private dealings, the lobby at the Willard used to be visited by President Ulysses S. Grant. He would sit in a comfortable leather chair in the lobby and enjoy a cigar and brandy. Many power brokers started courting him there. The legend is that Grant reportedly called these people lobbyists, hence the supposed origin of the word lobbyist.
— Pittsburgh Post-Gazette (Pittsburgh, PA), 03 May 1998

Tom and I continued on to the legendary Willard Hotel. Among many other bits of historic miscellanea, I learned that the word lobbyist was coined there when those seeking to influence legislators and legislation gathered in the lobby of this hotel which, in one shape or another, pre-dates the Civil War.
— Edward Sadie, Sunday Gazette-Mail (Charleston, W.V.), 18 Oct 2015

Ulysses Grant may very well have enjoyed cigars and brandy in the lobby of the Willard, and he also may have referred to the people who would buttonhole him while he was there as lobbyists, but we must inform you that this is not quite the same thing as coining the word. And given that lobbyist (and a number of semantically related forms of the word lobby) was in use well before the Willard even had a lobby, it is unlikely that this is the source. Sorry, Will.

Lobby ("a corridor or hall connected with a larger room or series of rooms and used as a passageway or waiting room") came into English use in the 16th century, from the Medieval Latin word lobium, meaning “gallery.” And in one of those rare, pleasing moments in which a word’s history seems to make sense, the lobbyist appears to have taken its name from the practice of such people doing their business in lobbies (generally the lobbies of a legislative house). Our earliest records of this word come from the first half of the 19th century.

The Whigs of Brooklyn have held a meeting, and appointed a commitee of lobbyists to proceed forthwith to Washington to persuade Congress to give up the Land Distribution, in order to secure protection.
— The Evening Post, (New York City, NY), 16 Aug. 1842

Lobbyist was preceded in use by the verb lobby (“to conduct activities aimed at influencing public officials and especially members of a legislative body on legislation”), which has been in use since the early 19th century.

The Senate had done little more than to meet and adjourn for some days;—and as I observed from the gallery, the members were rather lobbying about the Representatives’ chamber than engaged in discussion among themselves.
— The New Hampshire Sentinel (Keene, NH), 1 Apr. 1820

This would save a great deal of personal trouble, of base and spaniel-like solicitations, of lobbying, (pass us, gentle reader, the word, it expresses what none other can) of junketings, of wear and tear of conscience.
— The American (New York, NY), 5 Apr. 1824

While this one lobby member from Dutchess was electioneering for this bill, three or four Albanians were lobbying in favor of a tow boat incorporation for this city.
— The Evening Post (New York, NY), 6 Feb. 1826

The Oxford English Dictionary records a sense of the noun lobby, dating in use to at least 1640, which is defined as a place for legislators and members of the public to meet and discuss matters (“In the House of Commons, and other houses of legislature, a large entrance-hall or apartment open to the public, and chiefly serving for interviews between members and persons not belonging to the House”). And well before we began referring to the people who attempt to persuade elected officials as lobbyists there is evidence that we would refer to similar types of people as lobby-members (and we have also called them lobbyers).

Because, there exists, by a clear Calculation, a Majority capable of giving to that August body precisely the Form of a Sub-Committee to that little dark Closet of intrinsic Favor, to which even the two Councils, Privy and Cabinet, are but Lobby-Members.
— The Public Advertiser_ (London, Eng.), 12 Feb. 1777

Mr. Root must have staggered the minds of the agents, lobby members, &c. if his sportive humor, or sarcastic wit, and, to use his own words, “solemn facts,” could have any effect.
— New York Spectator (New York, NY), 13 Apr. 1814

It was evident that the banks did not like to part with these deposits, by the lobbyers that were around opposing the bill.
— Albany Evening Journal (Albany, NY), 13 Apr. 1852

As is often the case with words of recent vintage, this history is a combination of the self-evident (the word lobbyist is connected with lobbies) and the obscure (we really don’t know which was the first lobby in which a lobbyist lobbied). If you find yourself in need of the soothing balm of certainty you can always rely on the surety that Ulysses Grant had nothing to do with it.