The word's origins are quite literal

Hundreds of thousands of words have come into English from other languages (many thousands, for instance, from Latin alone). Often these words will begin with a meaning that is very similar, if not identical, to the one they had in a previous language.

Some words, however, come to English with the aim of starting afresh, taking on a new identity as they navigate this strange new language. Inspire is one of these words. 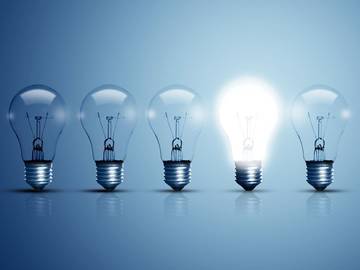 This moving little word may be traced back to the Latin inspirare (“to breathe or blow into”), which itself is from the word spirare, meaning “to breathe.” It didn't take long to establish itself in a figurative sense, as our earliest written English uses of inspire give it the meaning “to influence, move, or guide (as to speech or action) through divine or supernatural agency or power.” Many of the early figurative senses of inspire are religious in nature, so it is not surprising to learn that the word shares a connection with spirit (which comes from the Latin word for “breath,” spiritus, which is also from spirare).

A number of other early senses of inspire were indeed concerned with breath and blowing; beginning in the late 14th century the word carried such meanings as “to breathe or blow upon,” “to breathe in,” and “to infuse (as life) by breathing.”

Of some slight surprise, perhaps, is that inspire also shares a portion of its history with flatulent. While the two words do not have a common ancestor, they do both come from Latin words dealing with exhalations of air (flatulent comes from the Latin flare, “to blow, breathe”). Flare also serves as the basis for a synonym of inspiration, which is afflatus.

Mysterium commonly sounds a Religious secret, not obuious to capacitie of euery vnderstanding, rather requiring some extraordinary afflatus to the conceiuing of it….
— William Sclater, A Briefe Esposition With Notes, 1627

In the seven centuries since inspire came into English it has had a number of related words, including several for “one that inspires.” We have inspirer, inspirant, and, if you’re feeling a bit fancy, inspirator. There is also the fairly rare inspiratrix (“a women who inspires”), should you ever have need of so distinguishing.

The softest, sweetest, saddest of the nine—
Melpomene—she who her seat doth choose
By the hoarse murmurs of the heaving brine
The dark-robed Muse of solitary sighs,
The inspiratrix—Queen of Elegies.
— William Wastle, __The Mad Banker of Amsterdam_ (in Blackwood’s Edinburgh Magazine), 1819

If you are feeling capable of being inspired there is a word for that as well: inspirable. Or you could go out, newly armed with this vocabulary, to inspire the world. Just make sure you inspire people with your ideas, rather than your exhalations; no one wants you breathing on them.