The Lost Meanings of 'Farm' and 'Farmer'

The medieval farmer was a money collector

In the late Middle Ages, it was a common practice to rent or lease land suitable for agricultural purposes for a fixed monetary payment rather than a percentage of the crop. The sum of money to be paid was called ferme—or, in Modern English, farm.

"They … haskyd hem rent and ferme; and they seydyn they had payed you."
— Margaret Paston, Paston Letters & Papers, 1463 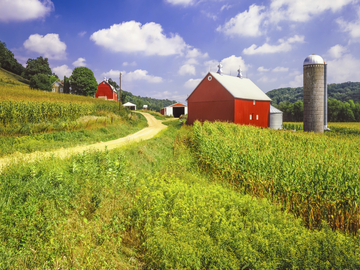 'Farm' comes from the Anglo-French 'fermer', meaning "to rent."

The source of ferme is Anglo-French fermer, meaning "to rent." That French verb is based on Medieval Latin firma, meaning "fixed payment," and the Latin verb firmare, "to make firm." In the mid-15th century, ferme was also being used as a verb having the same meaning as its French source. William Shakespeare used it that way in Hamlet in the word's modern form, which took shape during the 16th century:

We go to gain a little patch of ground / That hath in it no profit but the name. / To pay five ducats, five, I would not farm it …

The verb also came to refer to the collecting of payments, such as rent, which became a source of income for some. The occupation of a medieval farmer was essentially that of a debt collector's; however, the farmer paid a fixed sum to be allowed to collect farms—taxes, customs, excises, or other duties—that were due with the understanding that he retained whatever he collected.

It was around the early 16th century that the word farm was applied to the land held on lease for agricultural purposes, and later to any land used for the raising of crops, regardless of tenancy or ownership. By that century's end, farmer was being used in the familiar general sense referring to a person who cultivates land.

It is from the old practices of renting land to a tenant and allowing the original farmers to collect payments due for a fixed sum that we acquired the phrase farm out, meaning "to turn over (as a job) for performance by another under contract" (as in "The company farmed out the job of redesigning their website"). Another use of this sense of farm—often without out—concerns the turning over of a child into the hands of another for care. In Charles Dickens' Olivier Twist, for example, the parish authorities resolved that the eponymous character "should be farmed." Nowadays, it is usually baseball players being "farmed out" to minor-league teams.

With its ties to contractual work, farm out can be considered a surviving link to the early capitalistic senses of farm relating to renting and money collecting that have been metaphorically buried by the agricultural farmer's plow.

GAME ON
Farm Idioms Quiz: Not your children's farm quiz.