On the Disruption of 'Disrupt'

Life isn't fair, and neither is the way that we judge how people use the English language. Poets and writers tend to be allowed considerably more latitude than people in the worlds of business and technology in stretching the boundaries of how we use words. Consider the following, a headline from a 2018 issue of Big Data Quarterly: "3 Disruptors That Will Obsolete Your Legacy Systems."

This apparent disregard for the proper way of using words such as disruptor, obsolete, and legacy will offend the ears of many. But as is so often the case, it can be difficult to tell which aspects of business-speak are actually new, and which are old. 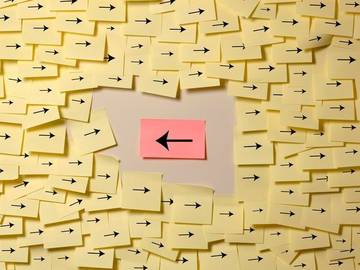 This new sense of 'disrupt' is a product of the late 20th century.

Although most often encountered as an adjective, obsolete has been used as a verb since the 1640s. Legacy, on the other hand, seems to have begun its adjectival use mainly in the world of business and computing in the late 20th century, referring to outmoded systems, or practices carried over from an earlier time. What of disrupt, the root of disruptor? It is similarly new, and, similar to legacy, its most recent sense developments appear to have come from business and technology.

Disrupt comes from the Latin disrumpere, which is formed by combining dis- ("apart") and rumpere ("to break"). The word began seeing use in English in the 16th century.

There are besides theis three principall differences of woundes: other woundes, althoughe they be not proper, as a wounde disrupted or broken, a wounde whiche is cutte, a wounde partlye broken, and partlye cutte.
— Thomas Gale, Certaine Workes of Chirurgerie, 1563

On the other side, if any man preach another Gospell, or defend or maintaine any contrary opinion, by which the peace of our Church is disrupted, with such a one, according to the Apostol call counsell to haue conference, and to admonish him, to returne to the soundnesse of faith, and into the bosome of our Church, like Noahs Done into the Arke againe.
— Matthew Brookes, A Sermon Preached at Pauls-Crosse, 1626

The word disruptor (also spelled disrupter) did not join disrupt for hundreds of years, until the middle of the 19th century.

His extraordinary zealous co-operation with those who have been disrupters of the Methodist Episcopal Church in this place—his inviting persons to unite with them, when there was little probability of any one accepting such invitation....
— Western Christian Advocate (Cincinnati, OH), 11 Dec. 1846

Whilst, at the same time, he denounced and abused almost every prominent true Democrat in Mississippi, as traitors, and disrupters of the government.
– The Woodville Republican (Woodville, MS), 24 Feb. 1852

In the late 20th century, the author and academic Clayton M. Christensen often employed the words disrupt, disruptive, and disruption in writing on the subject of technological innovation.

Journalists in the late 20th century writing about Christensen and his theory of 'disruptive innovation' were using disrupt and its variant parts of speech in a fairly narrow sense, describing a process in which new business entities successfully challenge established ones by initially focusing attention on those areas of service which the older companies had overlooked, and leveraging this to a long term advantage.

But in all the cases that Mr Christensen examined (mainly in the computer hard drive and earth-moving equipment industries), the downfall of leading manufacturers was causes by some disruptive innovation from an upstart outsider.
— The Economist (London, Eng.), 2 Feb. 1999

Despite the intended new meaning of disrupt and disruptive, the word has seen a fairly broad shift, and now is often found in advertisements and articles as a way of simply describing upheaval in an industry. An article by Christensen and two co-authors, in the Harvard Business Review in 2015, made note of what they felt was a semantic misapplication: "Many researchers, writers, and consultants use “disruptive innovation” to describe any situation in which an industry is shaken up and previously successful incumbents stumble. But that’s much too broad a usage."

While it is certain that some people will have a distinct influence on getting a word to change, it is also certain that they will not have the final say on when it should stop changing. The modern sense of disrupt is still working out its meaning. As it does so it seems likely to attract the displeasure of those who find business jargon off-putting.

If you are one of these people, and resent that the word has been tainted (unless you're planning on writing of how a small company of scrappy upstarts is making some giant conglomerate lose its market share) you may be in the market for an alternative to disrupt. You have come to the right place, as we have just the word you need. It comes from the same root as disrupt (disrumpere), is just as old (mid-16th century), and has never been defiled by being adopted into the language of commerce. The word is disrump.