Dictionaries (not ours!) can be difficult to use. Given that there is often an expectation that we’ve just lined every word in the English language up in neat, alphabetized little rows, it can be disconcerting to discover that things aren’t quite so tidy. Some words will simply be listed as the adjectival or adverbial form of a noun, which means that they will be placed under that headword, and may not have their own entry. Such is the case with campy, which is listed under one of the noun senses of camp (“something so outrageously artificial, affected, inappropriate, or out-of-date as to be considered amusing”). 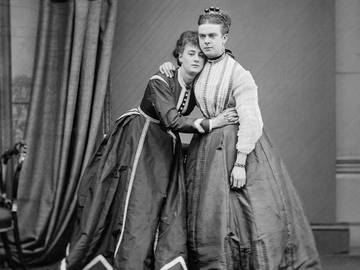 In 1868, Fanny Park wrote "My 'campish undertakings' are not at the present meeting with the success that they deserve; whatever I do seems to get me into hot water somewhere but, n’importe, what’s the odds so long as you’re rappy?"

This sense of camp is of recent vintage (we think), of uncertain origin (we’re pretty sure), and possessed of a somewhat vague range of meaning (this one we’re definite about). Any self-respecting article on camp (or campy) must include at least one passing reference to a Susan Sontag essay (done!), mention of gay panic in Victorian England, and a healthy dollop of uncertainty; this one aims to meet all these criteria.

What is currently the earliest known use of camp (in the sense being considered here) comes in 1909. The sense must have already existed, since this citation was from something of a dictionary, and the compilers of these works tend not to make words up (we think some of them used to do this, but the practice hasn’t been considered respectable for several hundred years). Furthermore, the man who explained this word did so with a splendid display of distaste, defining it at arm's length and wearing gloves, which strongly suggests that the use was sufficiently common and established to have attracted a degree of censure.

Camp (Street). Actions and gestures of exaggerated emphasis. Probably from the French. Used chiefly by persons of exceptional want of character. "How very camp he is."
—James Redding Ware, Passing English of the Victorian Era, 1909

At first, camp was used not simply in reference to exaggerated mannerisms, but specifically to those that were believed to be characteristic of gay men. The word has since taken on additional senses that are not necessarily connotations of sexuality (such as “a style or mode of personal or creative expression that is absurdly exaggerated and often fuses elements of high and popular culture”), but the history of camp and campy is strongly connected with issues of gay identity.

For instance, although what is currently the earliest known use of camp comes from 1909, there is earlier use of a related word, campish, which suggests that camp may have existed as part of a gay vernacular for a number of decades prior to being included in Ware’s Passing English.

In 1870 there was a court case in London which attracted a considerable amount of attention. Two men had been arrested and charged with, as the Morning Post of London phrased it, “having frequented public thoroughfares and places of amusement in female attire for an unlawful purpose, and with having conspired with others to incite divers persons to commit an abominable crime.”

One of the reasons that the case was so widely reported on was that the prosecution had managed to enter as evidence a series of letters written by one of the defendants, a number of which were subsequently published in a great many newspapers. In one of these missives, written in 1868, Frederick William Park (writing as Fanny Winnifred Park) makes reference to “campish undertakings.”

My "campish undertakings" are not at the present meeting with the success that they deserve; whatever I do seems to get me into hot water somewhere but, n’importe, what’s the odds so long as you’re rappy?—Believe me, your affectionate sister-in-law, Fanny Winnifred Park
—The Observer (London, England), 29 May, 1870

Our earliest written evidence of the word campy comes from 1958, and is found in unpublished letters from the archives of the Mattachine Society, a gay rights organization founded in the middle of the 20th century.

I think that the pictures are real campy. Do you want me to return them to you?

Joe has recv’d let. from Ken Zwerin saying he wld b in NY on April 10. I suppose u both remember him – gave a talk last June. Wld we b interested in asking him to speak again? He provd very entertaining, but quite a few in the audience were shocked – found talk far too campy, etc. – embarrassingly so.

The noun form, campiness, appears to have entered our language a few years later, and by the time it was appearing in print (in the mid-1960s), it was being used simultaneously in the mainstream and gay press.

Though Buck Rogers himself seems to be enjoying some sort of resurgence thanks to pop art and the sudden “campiness” of defunct fictional heroes, his preoccupation with space has been trampled beneath the feet of a blasé public who almost expect minor space shots as a matter of course.
—The State Journal (Lansing, MI), 16 Jun. 1965

But the fact that the magazines are tripping all over each other to be first with such glossaries seems to indicate a very interesting new trend: according to someone, at least, campiness is the hip, “in” thing.
—Gay International (Ottawa, Canada), June 1965

So what does it mean when someone describes a movie as camp or campy? Does it mean something along the lines of “it’s so bad that it’s good” or should it be taken to mean “combines elements of high and popular culture in an exaggerated fashion”? They can mean either, or both, depending on the context in which the words are used.