The Ize Have It

The Strange Case of the Poet, the Pond, and Dutch Cleanser

For some reason, words ending in –ize tend to get people's back up. Finalize and prioritize fall famously into this category, but even seemingly benign words such as utilize can come in for criticism. Usage commentators frequently express their dislike for utilize because they regard it as a needlessly long and pretentious substitute for use. 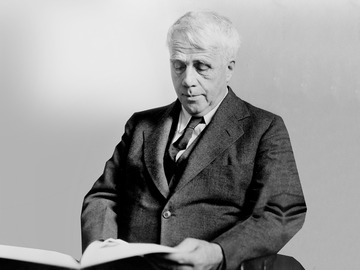 Perhaps that was on the mind of a recent correspondent who wrote in wanting to know what was the source for the quotation from Robert Frost that we show at our entry for utilize.

The editor handling this query checked our files and replied that the quote was from a letter that appeared in the Selected Letters of Robert Frost. That wasn't quite enough for the correspondent who felt there was something "bizarre" about this use and wanted more context.

And so our editor made a trip that most editors generally avoid. She headed off for basement storage where all of the books that we have ever read for citations are stored.

A note about the citations: Citations are examples of words used in context that we consult for guidance in understanding what words mean and how they are used. We collect these citations from books, magazines, newspapers, and other print and digital sources on an ongoing basis. We now have more than 16 million such citations, and in many cases we keep the books that the citations come from.

This citation gathering process has been going on for more than a hundred years, so we have amassed quite a lot of books. Most of them reside on steel shelves in a giant, dimly lit room in the basement. You don't go there unless you have to, but our editor felt this situation warranted the trip (were we going to let the "bizarre" charge stand?), so to the basement she went.

Here's what she found and reported back to our correspondent: This sentence comes from a letter to James R. Wells dated July 27, 1930. (We found out later that Wells and his wife Hilda were the wealthy proprietors of Slide Mountain Press that had printed and published one of Frost's books the year before. The editor of Selected Letters refers to Wells as "an attractive playboy.") From what Frost says in the letter, it appears that Wells has invited himself to visit Frost at his farm in Vermont and to ask for something from Frost. Frost essentially says, good luck. "Let's see you or anybody else extract anything from me in my present state of mind."

Why Frost was in this state of mind he doesn't say, but he warns Wells that if he shows up, Frost is going to put him to work.

"I ought to warn you if you come here you have to work digging out my fish duck dog and frog pond. You would go round New York sowing suspicion that my farm was the kind where there was no work done. There'll be some work done by you all right."

He goes on to tell Wells that when he comes he better bring rubber boots and Dutch Cleanser with him, and he rounds out the letter with this closing:

"You come here to get anything out of me and you're lucky if you get away even. I dont mean to be sinister. Only I'm a great person for utilizing waste power."

So, okay, we'll admit that there is something a little bit bizarre about this. Not every host would tell a guest to bring rubber boots and Dutch Cleanser with him. But, dear correspondent, we rather like the last sentence, and it would be a dud if you replaced utilize with use.