Don't Blame Millennials for the Introductory 'Which'

Sorry, cool kids, you're not the first to use the word to signal commentary. Which, history.

Though lexicographers spend their days chasing down English, sometimes it's the less noticeable and more subtle shifts in language that catch their eye, rather than the seemingly endless, flashy neologisms they track. Which, understandable. 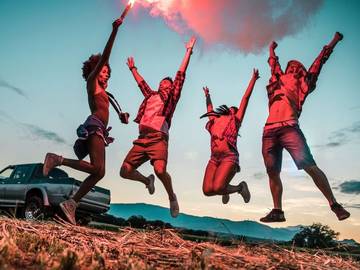 Yet another thing millennials don't get to own. At least you still have avocado toast. Which, yay!

This particular use of which is one of those subtle shifts. This which functions as an introductory particle, and occasionally shows up as a connective particle. In plain English, which in these constructions introduces a word or connects a phrase that is often a reaction to or commentary on the previous clause:

You can decide to go out without me, which, whatever.

They seemed to be really angry at me, though they didn't say why. Which, I don't know.

Though we may associate these particular constructions with the youth of today, they predate Millennials by about 500 years: which has been used to link clauses since at least the 14th century. One legal record written in the 15th century gives us the predecessor to the current shortened form:

...contrary to such directions that we, by the advice of the Council, took among you before departing thence; which, if it be so, we have great cause for displeasure...
—The Coventry Leet Book, or Mayor's Register (translated), ca. 1481

This connective which is a bridge between the pronoun and a straight-forward conjunction. There is still an antecedent, though which doesn't act as a pronoun alone but is paired with another pronoun pleonastically (in the above quote, it's the "it"). But oftentimes this particular which doesn't look pronominal; it looks like a conjunction. And so by the 18th century, the antecedent was dropped, and which was just used to introduce a clause:

Which, and I am sure I have been his servant four years since October, And he never call'd me worse than sweetheart, drunk or sober.
— Jonathan Swift, Mary the Cook-Maid's Letters, 1723

or to connect one clause to another:

'That noble young fellow,' says by General; 'that noble, noble Philip Firman.' Which noble his conduct I own it has been.
—William Makepeace Thackeray, The Adventures of Philip, 1862.

Which became a sort of linguistic switch that signaled the end of a declarative statement and announced an opinion or commentary ahead. It tends to show up only in informal writing or transcribed speech, sometimes as a verbal pivot point:

Do you want to speak to Gary? ... No. I I don't know. Probably ^pause I don't know unless he's got a special tunnel in the bathroom that gets him out of there which I don't know I don't know, where you going?
—Andy Warhol, A, A Novel, 1968

... and that, I think was probably when I was getting ready to play it with the Solti on the E trumpet, which, okay... Here we are..."April 3rd."
—Adolph Herseth quoted in International Trumpet Guild Journal, 2003

and sometimes as commentary:

Whenever a major character is killed off The Walking Dead, the cast and crew throw a “death dinner.” Scott Wilson (Hershel) and David Morrissey (The Governor) shared theirs, which, awkward,...
—Josh Kurp, Uproxx.com, 29 Mar. 2017

They watched a computer simulation of how the fangs must be shaped, how they would enter the body. The closest analogy was a rattlesnake. Which, bleh.
—Nancy Holder, in An Apple for the Creature, 2013

Even when the commentary in question isn't so much a word as it is a shuddering utterance:

While this use doesn't appear much in edited prose, it is increasingly common in speech and starting to make its way into more print. Which, cool.