The Inside Scoop on 'Inside Baseball'

Plus 'inside joke', 'inside job', and other 'inside' words

The word inside has been bouncing about in the English language since the 14th century, first as a noun, then picking up additional work in subsequent centuries as an adjective, adverb, and preposition. In the past hundred or so years it has formed the beginning of a large number of compounds, often with the meaning of "power, trust, familiarity" or "confidential information." 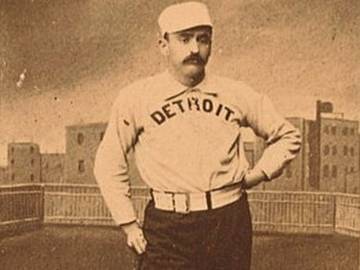 Edward Hugh "Ned" Hanlon was considered to be one of the founders of 'inside baseball'—a term which originally referred to a style of play which relied on bunts, stealing bases, and minor hits, rather than on flashier techniques, such as home runs.

Inside baseball sounds like it might be a recent coinage, perhaps a phrase that originated in the 1980s, along with sabermetrics. However, this word has been in use for quite some while, with evidence dating back to the 1890s. The original meaning appears to have referred to a particular style of play which relied on bunts, stealing bases, and minor hits, rather than on flashier tactics, such as home runs.

There was no time for “inside” baseball; the Boston team were on to every move of Hanlon’s men.
—Detroit Free Press, 25 September 1897

Hanlon, Tebeau, and “inside” baseball, with the big combination already formed, will get a poor run for their money.
—Chicago Daily Tribune, 17 November 1899

Although Hanlon was president of the club, and was first responsible for the billingsgate inside baseball methods used by the Orioles, he was closely followed by the Cleveland crowd under the leadership of Tebeau.
—Cleveland Plain Dealer,20 November 1899

Within a decade or so the term came to be used to refer to a specialized knowledge about the sport of baseball, rather than simply describing a style of play. By 1952 inside baseball had begun to be applied to politics, in a figurative sense, as seen in an article from Boston Traveler from December 4th of that year: “The evidence indicates the Eisenhower staff is going to have to learn their ‘inside baseball’ the hard way.” Today, inside baseball is used more often to describe non-sporting matters, and typically denotes minutiae or things about which only a few insiders care.

The inside joke ("a joke that is understood only by people with special knowledge about something") likewise originated in the 19th century, although evidence suggests that it appeared before inside baseball:

By the way, speaking of “Nick” reminds me of an “inside joke” about him, which I will take the liberty of crowding in.
—Spirit of the Times, 10 March 1849

The order of the “Sons of Malta,” with all its inside jokes, is again reviving in the East.
—Detroit Free Press, 25 October 1870

In addition to these we have numerous other instances of inside words, most of which also involve specialized knowledge of one kind or another. One can get on the inside track or pull an inside job. One can try for an inside straight in a card game ("four cards of a poker hand [as 9,8,6,5] that will make a straight if a card of one particular rank is added") or get the inside scoop ("information to which only a few are privy") on something.

One might make the case that knowing the history of when inside baseball began to be used in English, and the changes in meaning it underwent over the years, is itself a sterling example of the most recent sense of inside baseball. However, given that you are reading an article on our site, there is more than an outside chance that you are the sort of person who might find this information of interest.