The Infernal History of 'Turtle'

The word has its origins beyond the gates of, gulp, hell.

We're sorry to break it to you, but the word turtle has its origins in, well, hell. 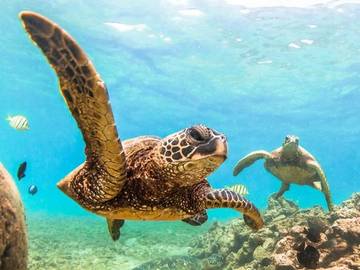 Before we jump into etymology, let's look at the word turtle in its modern use. It refers to any member of the approximately 300 species of reptiles famous for their hard shells, into which they can retreat and out of which they cannot get (no matter what cartoons have led us to believe). Tortoises are a kind of turtle. They're specifically the ones that spend most of their time on land. One is particularly famous for beating a hare in a race. Terrapins are also a kind of turtle. Terrapin used to refer broadly to "any of various aquatic turtles," but it now most often refers to the diamondback terrapin of the eastern salt marshes and coastal waters of North America.

But yes, as we said above, the word turtle has its origins in hell. And this despite the fact that turtles seem rather sweetly shy and reclusive and are commonly featured on pajamas for the pre-verbal set. The fact is, while they've got a largely unimpeachable reputation in today's world, 17th century sailors saw things differently.

The English-speaking sailors who gave us our word turtle may have in fact been largely unaware of the implications, but they apparently modeled tortu, which became turtle, on the French word tortue, which itself was from the Late Latin tartarucha. Tartarucha was short for the phrase bestia tartarucha (or a similar collocation), which means "infernal beast" or "beast of the nether regions."

It turns out that in early Christian literature and art the turtle was a symbol of heresy and evil. Why? Because of its lowness to the ground and its tendency to wallow in mud and filth. We see evidence of this characterization of turtles in a mosaic of the late 3rd century C.E. in Aquileia, northern Italy. The mosaic depicts a turtle, partly withdrawn into its shell, aggressively confronted by a rooster, symbolic of goodness. The rooster and the turtle were ancient emblems of light and darkness, taken from the pre-Christian cult of Mithras, popular in the later days of the Roman empire. The poor turtle: this demonic characterization of the animal was pervasive enough to affect everyday speech, and the Romance descendants of tartarucha largely ousted the descendants of the classical Latin word for “turtle,” testudo. (That classical Latin name lives on in an appropriate habitat—that of scientific classification: turtles are of the order Testudines, which descends from that word.)

The good news in all this? The origin of the word turtle does not make the creatures themselves evil or any less fascinating, nor do we think it makes them inappropriate for adorning kiddos' pajamas. "Infernal Turtle" also sounds like a pretty good band name.