A Look Back at 'Throwback'

How did a word that used to have a negative meaning become so beloved?

It has become a social media tradition: Throwback Thursday, the opportunity to revel in pre-Internet nostalgia and share your embarrassing (often pre-digital) photos, tacky clothes, and out-of-date hairstyles from your wild and carefree youth. 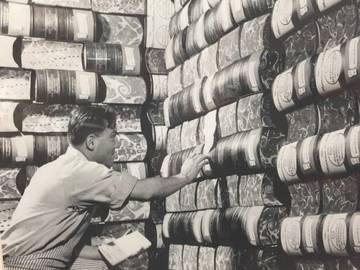 A #tbt picture from the Merriam-Webster archives. The earliest uses of 'throwback' were negative, as in "an indefensible throwback to the Stone Age." So how did it come to refer to a wistful revisiting of the past?

The web site KnowYourMeme.com dates the earliest recorded mention of the phrase Throwback Thursday to 2006, crediting an artist named Saxton Moore, who used the alliterative phrase as the title of a blog post in which he reimagines a number of vintage cartoon characters. After Instagram launched in 2010, the hashtag #tbt quickly established itself as a marker of the long, strange trip back to one's halcyon days.

At first glance, the word throwback looks like it should suggest a rejection—you might throw a fish back into the lake, or throw back a home run hit by the visiting team. So how did it come to refer to a wistful revisiting of the past?

Early uses of throwback refer generally to backwards movements, but in evolutionary biology, a throwback refers to an organism that exhibits atavism—that is, the presence of traits thought to have vanished within the species. Since it is assumed among evolutionary scientists that organisms will perpetuate those traits that aid in the survival of a species and eliminate any that serve as a liability, the reappearance of long-vanished traits is viewed as antithetical to evolutionary progress.

As the term wormed its way out of science and into more general contexts, throwback held onto the notion of returning to a more primitive state. The Oxford English Dictionary's earliest citation comes from an 1888 Rudyard Kipling story:

Most men and all women know the spasm. It only lasts for three breaths as a rule, must be a "throw-back" to times when men and women were rather worse than they are now, and is too unpleasant to be discussed.
—Rudyard Kipling, "The Bronckhorst Divorce-Case," 1888

Later uses continued to connect the term to a barbaric earlier state:

"Well," said Summerlee, "since you ask my opinion, [suicide] strikes me as an indefensible throwback to the Stone Age or before it. I'm of the twentieth century myself, and would wish to die like a reasonable civilized man."
—Arthur Conan Doyle, The Poison Belt, 1913

It was a few decades into the twentieth century when throwback, perhaps following the route of the similar compound flashback (a word from filmmaking that describes a return to an earlier narrative action), began to refer more innocuously to something reminiscent of an earlier time:

If Aunt Dahlia has a fault, it is that she is apt to address a vis-à-vis as if he were somebody half a mile away whom she had observed riding over hounds. A throwback, no doubt, to the time when she counted the day lost that was not spent in chivvying some unfortunate fox over the countryside.
—P. G. Wodehouse, Right Ho, Jeeves, 1934

There are sporadic examples of marketers seizing on the phrase Throwback Thursday that date from the ancient era before Internet memes were a thing. For example, in April 1999, to promote its retro-styled menu, a restaurant "in a historic adobe" in Monterey, California advertised "Throwback Thursdays" featuring "martinis and Manhattans at $2.50 a pop" and "such oldies but goodies as oysters Rockefeller and New York strip with pomme frites."

These throwbacks, it seems, were ahead of their time.