No cats were harmed in the making of this word

Before the word tabby called to mind the likes of Lil Bub and other kitties with striped or mottled coats, it referred to something more refined than cute: a kind of silk taffeta.

The silk wasn't plain; it had an irregular wavy finish. It was made in Baghdad, in a quarter of the city called Al-‘Attābīya, and the origin of the fabric eventually lent its name to the fabric itself: the silk became known as ‘attābī. 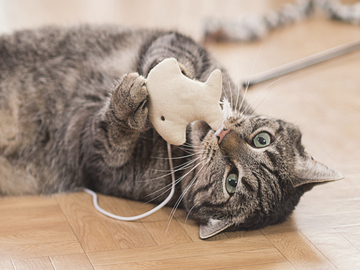 'Tabby' originally referred to a kind of silk taffeta with an irregular wavy finish. The name was a corruption of ‘attābī, short for Al-‘Attābīya, the place where the silk was produced.

The name for the cloth was adopted into Medieval Latin as attabi, and then into French as tabis. English speakers modified the word to tabby in the early 1600s. They didn’t connect it to cats at that point though: the word was used solely for plain-woven silk cloth with a wavy moiré pattern.

Eventually the fabric meaning of the word faded from prominence, and tabby was free to (eventually) devote itself wholly to memes.