The History of 'Squirrel'

They're nearly everywhere, so you might as well know what their name means

The ubiquitous squirrel, busily rushing about our yards and gardens and parks and cities, has had its English name since the 14th century. The word squirrel, notoriously difficult to pronounce for non-native English speakers, is ultimately Greek in origin: it comes from skiouros, from skia, meaning "shadow," and oura, meaning "tail." Presumably, the squirrels of long-ago Greece also sat with their bushy tails raised up against their backs and over their heads, casting a bit of shade on their furry brows. 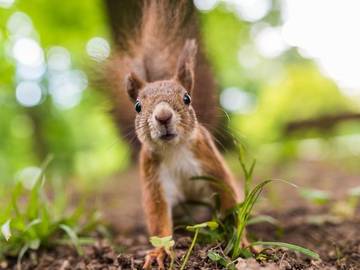 Bookmark this to read during the long winter months.

The English word had a number of spellings from the time Chaucer wrote of "squyrelis and bestes smale of gentil kynde" ("squirrels and small animals of gentle nature"). Among them were squyrelle, squirile, squirrell, and squerel. By the seventeenth century the spelling we currently use had become the standard one.

Similarly, the meaning of the word squirrel hasn't always been what it is today. For example, Shakespeare used it to refer to a very small dog in Two Gentlemen of Verona:

The other squirrel was stol'n from me ... and then I offered her mine own, who is a dog as big as ten of yours.

The word squirrel had had its literal mammalian meaning for centuries before it developed the verb meaning of "to store up for future use," as in "squirreling away money," in the early decades of the 20th century.

Unrelated to the word squirrel is a fact about the creature itself that, having learned, we feel we must share: a squirrel's front teeth can grow six inches in a year. It's unclear to us just how the chewing relates—is the squirrel's constant mastication a means to combat dental exuberance? Or is its natural dental vigor an adaptation to address compulsive nibbling? Encyclopedia Britannica isn't telling.