The Silent History of 'Parlor'

A tale that begins with a vow of silence and ends with ice cream and tattoos.

Draw up a chair—we have a story to tell you. The tale of the word parlor begins long ago and far from the digital space in which you are currently encountering these words. 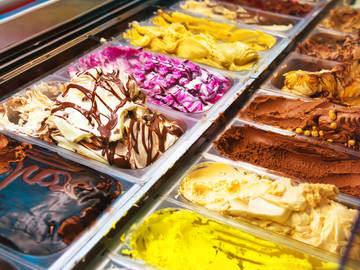 The talking still stops when you dig into an ice cream sundae.

Our setting is historical and Continental: it's the Middle Ages, and members of a French religious order have committed to a rule of silence. The rule requires that members do not speak to each other or to outsiders except when they are in a special room. This special room is named for the exceptional thing that happens in it. It is called the parlëure; its name is a derivative of the verb parler, meaning “to speak.”

Skip forward a few centuries and English speakers have borrowed parlëure as parlure or parlour. Both they and the French have seen an extension of the word, which now also applies to rooms unacquainted with vows of silence, rooms such as the chamber off the main hall of a manor house, where private conversations are easily had, or the room in a municipal building where conferences happen. The religious are not present, and neither is the sense that talking is an exceptional activity.

The parlor is, though, still and more than ever about talking. In England, it becomes the best-furnished room in ordinary middle-class homes, often street-facing, where families receive guests. This meaning of the word settles in across the pond as well, and in both British and American English parlor comes to refer to what is also now called a "living room," and was in past times also called a "drawing room." The word gets the additional application as a term for a room in an inn, hotel, or club that is quieter and more private than the dining room or bar.

For all of the extending, the word's referent at this point has not strayed so very far from the room where pious, aspiring conversationalists press through the hoarseness of unexercised vocal cords to finally say something. It is still a room where people come together to talk.

And then the Americans do something very American. They go and begin to apply the word to something altogether new: a well-appointed commercial establishment that engages in a specified type of business. They refer to ice cream parlors and beauty parlors, to pizza parlors and tattoo parlors, and even to funeral parlors. And truth be told, we don't think they are considering the etymology of the word at all.

The "commercial establishment" use goes on to take root and flourish, and now may very well be the main meaning many English speakers know. While the disconnect between the parlëure of the devout and the ice cream parlor on Main Street is considerable and to some, perhaps, even poignant, we submit that it does make for a good story—maybe even one worth taking a break from a vow of silence to talk about.