How 'Namaste' Entered The English Language

Religious and secular culture come together in the increasing use of namaste (pronounced \NAH-muh-stay\) in English: the term is associated with both Hinduism and yoga. The word comes from Sanskrit and literally means “bowing to you” or “I bow to you,” and is used as a greeting. Sanskrit is the ancient and classical literary language of Hinduism which today serves as a learned language and lingua franca among scholars. Other well-known borrowings from Sanskrit in English include karma and nirvana. 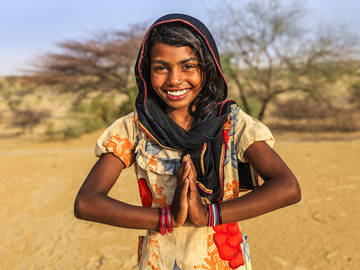 Many Americans first encountered the word 'namaste' when reading about the newly independent India during the mid-20th century.

The Sanskrit phrase namaste is formed from namaḥ, meaning “bow, obeisance, adoration,” and the enclitic pronoun te, meaning “to you.” The noun namaḥ, in turn, is a derivative of the verb namati, which means “(she or he) bends, bows.”

For such an old word, it came to English fairly recently. It had been transliterated as na-mas-tay, namasthe, and namaste until the latter became standard in the mid-20th century. Its initial use for a broad American readership, unsurprisingly, was associated with stories about the newly independent India and its leader:

In response Nehru closed his palms in front of his chest. This traditional Hindu namasthe (greeting) is as much a part of his public manner as was the V sign for Churchill.
—TIME, 16 August 1948

Graciously, Nehru took the gift. On the ramp’s top, he turned and clasped hands in a farewell namasthe. “Goodbye and good luck,” he called.
—TIME, 17 October 1949

Early use of the term in English can be found in English-language Indian press:

By the bye, Sir, is it too much to say that it is high time Indian members accosted each other with a dignified salaam or a hearty namaste or exchanged compliments with each other in Hindi?
—L. A. Adwani, (letter) The Times of India (New Delhi, India), 31 Mar. 1920

Our files show that a related word, namaskar, was considered for entry during work on the revision of our Unabridged Dictionary in the 1950s. A draft definition reads:

: a respectful Indian mode of address or salutation performed by joining the palms, inclining the head, and saying “namaskar”

Among the citations for this word is a report of Gandhi’s funeral:

One by one they filed past, some doing namaskar (hands placed together in an attitude of prayer), others bowing low and touching the ground with their foreheads.
—U.N. World, April 1948

Others similarly gloss the word’s meaning in context:

The old man made his usual namaskar—the Indian greeting of folded hands.
—The New Yorker, 26 May 1951

But namaskar didn’t stick in English, and instead today there is much evidence for the two-word phrases namaste pose, namaste gesture, and namaste posture. The Oxford English Dictionary also records namaste used as a verb, meaning “to give a namaste (to).”

A related word, namazlik, meaning “prayer rug,” was entered in Merriam-Webster’s 1934 Unabridged edition, Webster’s Second. It comes from the Turkish word namaz meaning “worship ritual, prayer” and goes back to Middle Persian and Avestan (the oldest Iranian language) to nǝmahya- (“honor, pay homage to”), a derivative of nǝm- (“bend”), which is exactly cognate with Sanskrit namati, thereby connecting the ancient gesture and the ancient tradition of prayer rugs through the ancient roots of distantly related languages.