The History of 'Jack-O'-Lantern'

A man with a lantern, a light on a marsh, and a Halloween pumpkin

The term jack o’lantern was a name for lantern-carrying night watchmen in England in the 1600s. By the 1800s, it had come to mean “a carved pumpkin used as a lantern,” which may have evolved from ancient rituals using lanterns, folk tales involving spirits who carried lanterns, or young pranksters who carved scary faces into pumpkins.

The term jack-o'-lantern has been used in American English to describe a lantern made from a hollowed-out pumpkin since the 19th century, but the term originated in 17th-century Britain, where it was used to refer to a man with a lantern or to a night watchman. At that time, the British often called men whose names they didn't know by a common name like Jack. Thus, an unknown man carrying a lantern was sometimes called "Jack with the lantern" or "Jack of the lantern." 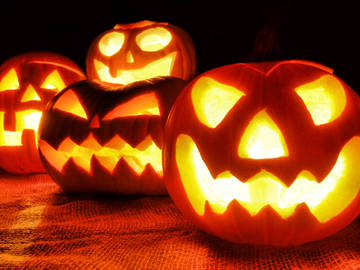 We know where 'jack-o'-lantern' comes from. What's less certain is how the name came to be applied to a hollowed-out pumpkin.

At the same time, jack-o'-lantern was applied to another kind of light: the flame-like phosphorescence caused by gases from decaying plants in marshy areas, also known as ignis fatuus—a Medieval Latin term that means literally "foolish fire"—or will-o'-the-wisp. It's easy to grasp how people might have associated the natural phenomenon to flickering distant lanterns (held by Jack); however, the connection of jack-o'-lantern to a carved, lit pumpkin is not as clear.

One of the tri-state's most exciting Fall events, The Great Jack O'Lantern Blaze, has now been extended through November 30th. This renowned Halloween experience features over 7,000 hand carved jack o'lanterns. These illuminated jack o'lanterns are placed to form impressive displays from the Statue of Liberty to the infamous legend of Sleepy Hollow bridge.
— Kayla Selvaggio, Patch.com, 24 Oct. 2019

One theory begins by associating the illumination of a hollowed-out pumpkin with a Celtic pagan practice in which turnips or other root vegetables were hollowed out, carved with grotesque faces, and then illuminated by coal, wooden embers, or candles as a way to ward off evil spirits. The custom was carried on by Christians during the feast of All Hallows' Eve—observed on October 31 and etymologically related to Halloween—the evening before All Saints' (or All Hallows') Day. It is likely that immigrants brought this custom to America and, finding turnips scarce, used native pumpkins instead. However, that only explains the carving and illuminating of pumpkins. It does not shed light on how the term jack-o'-lantern began to be applied to the pumpkin. The argument might be made that immigrants drew a connection between the glow of the pumpkins to the ignis fatuus back home, but why wouldn't a similar connection have been made to the familiar hollowed-out, lit turnips earlier?

Another theory is that the use of jack-o'-lantern for a pumpkin lantern originated in a story from Irish folklore. There are many versions of the story, but they all tend to center on a man named Jack, the devil, and a lit turnip with which the soul of Jack aimlessly wanders the Earth—but, again, it does not establish a convincing connection between the term and the pumpkin.

A more compelling theory is that the application of jack-o'-lantern to a hollowed-out, carved pumpkin originated in nighttime pumpkin pranks. In 19th-century America, the pumpkin was readily available to young pranksters who knew that a grotesque face could be carved into its hollowed-out body, and that if it were lit up it could be used to frighten unwary people at night. Eventually, people began referring to the pumpkin in the prank as a jack-o'-lantern because of its similar flickering, glowing appearance when lit to the jack-o'-lantern lights seen in marshy areas. The leap from the prank pumpkin to the marsh lights is speculative, but it is reasonable to believe that Americans were aware of the ignis fatuus through scientific articles in newspapers and magazines and through stories about Britain.

Whatever your belief, the uncertainty of how the pumpkin jack-o'-lantern got its name is certainly fitting for the Halloween decoration. Also fitting is that the first known use of its name in print is in American Gothic writer Nathaniel Hawthorne's Twice-Told Tales in which the hiding of a legendary bright gem, the Great Carbuncle, is discussed:

Hide it [the great Carbuncle] under thy cloak, say'st thou? Why, it will gleam through the holes, and make thee look like a jack-o'lantern!