The History of 'Hot Mess'

In recent years the term hot mess has been called upon to designate various unmanageables, of both human and non-human varieties:

… sometimes, when someone is a failure on TV, it’s because they’re a “hot mess” or have some other fatal flaw that keeps them in the same hamster wheel. But in real life, failure is just part of the learning process and usually doesn’t mean there’s anything wrong with you.
— Karen Fratti, Hello Giggles (hellogiggles.com), 14 Mar. 2018

A large society run like a family is in every meaningful sense tyrannical, and a family run like a democracy or a business is a hot mess.
— Jonah Goldberg, National Review, 23 Mar. 2015

And while Sarah Drew has done some of the best acting of her career over the past few months—she's always been admirably philosophical about her approach to playing a character with April's erratic behavior—her character's ongoing storyline has been a hot, hot mess.
— Lauren Hoffman, Cosmopolitan, 13 Mar. 2018

But just where did the term come from? 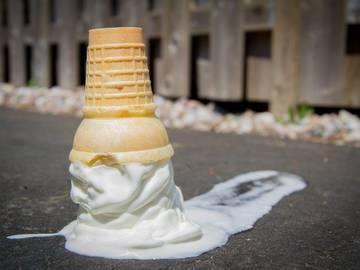 The term hot mess originally referred to a mess that was literally hot—mess in this case being related to the kind served in a mess hall. Before it was anything else, mess was a word for a quantity of food. (It traces back to the Late Latin missus, meaning “course at a meal.”) Later it referred to a prepared dish of specifically soft food. And a hot mess was originally a hot dish of such food:

On the table before the lieutenant was a white wash-hand basin, nearly half full of burgoo, a composition of boiled oatmeal and water, very wholesome, and very hot…. "Smallbones," said the lieutenant, after trying the hot mess before him, and finding that he was still in danger of burning his mouth, "bring me the red-herring."
— Frederick Marryat, Snarleyyow: Or The Dog Fiend, 1896

They were supping or breakfasting together off a hot mess of meat and vegetables, and rose up at our entrance, for the room boasted of a wooden bench and couple of ricketty stools.
— Henry Vizetelly, Glances Back Through Seventy Years, 1893

Hot mess in these contexts may sound quaint to the modern ear, but these hot messes had hardly cooled when a more familiar hot mess made its first (known) appearance in print:

I say if [the public] would only stop to consider this before forming an opinion perhaps the wage-earners might win; but no, they believe everything they see in the newspapers. If the newspaper says the sky is painted with green chalk that is what goes. Verily, I say unto you, the public is a hot mess.
— P. J. Conlon, The Monthly Journal of the International Association of Machinists, January 1899

The public, according to Conlon, was not a hot dish of soft food, but was in disarray and disorder, not able to think for themselves. The machinists were on strike, and Conlon felt that the public should have understood that the workers were striking for important reasons and at great personal sacrifice; instead they believed what the newspapers told them, which was ostensibly that the workers’ complaints were overblown. And there it was: a quick step from the literal to the figurative, from the meal to the metaphor.

Hot mess spent the 20th century mostly shut up in books written the century prior (not entirely, though: “Now, ef I says the word, yo’ll be in a hot mess in about one minute!,” a character threatens in a 1907 issue of Pall Mall Magazine, for example). But in the early 21st the term sprang forth with renewed vigor.

It’s not at all clear what made hot mess into such a hot 21st century linguistic commodity, but evidence of its progress is everywhere. And the term continues to evolve: while earliest 21st century uses are almost uniformly unflattering—the emphasis is on the mess part—the term has developed a newer meaning, referring to a person who’s disorganized, disheveled, or self-destructive but who is also at the same time “hot,” as in attractive or sexy.