How did 'gridlock' move so quickly?

Though it's firmly established in our language, 'gridlock' is relatively new

Some words are successful creatures, and manage to go from a nascent state to being used by millions of people with an ease that makes their more obscure brethren gasp with envy. Other words, such as debacchate (memorably defined by Henry Cockeram in 1623 as “to revile one after the manner of drunkards”), are less successful, useful though they might be. The word gridlock is very much an example of the former, rather than the latter. 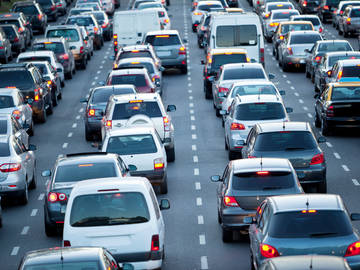 Our earliest written evidence for 'gridlock' comes from 1980—though the word may have existed before then, it's still surprisingly new.

Gridlock entered our language quite recently; our earliest written evidence for this word comes from 1980 (although there have been reports that it existed as part of the jargon of urban planners for some time prior to this). The initial sense of this word (which is still very much in use) was “a traffic jam in which a grid of intersecting streets is so completely congested that no vehicular movement is possible.” Although it may have existed before the 1980s, it was thrust into the public consciousness following the transit strike of New York City in 1980, when the subway and bus workers of that city walked off their jobs for over a week.

The fears arising from the recent transit strike in New York City of “Gridlock,” “Spillback” and dangerously unhealthy carbon monoxide levels underscore our concern about the inescapable relationship of mass transit, pollution and congestion.
—Increasing Commuting by Transit and Ridesharing, 1980

Spillback may not have caught on, but gridlock was an instant hit, and the word went from relative obscurity (appearing mainly in municipal planning reports) to being the descriptor of choice for people explaining why they were late. One thing that is striking about gridlock is that, in addition to becoming part of our general language, the word almost immediately took on a figurative sense, “a situation resembling gridlock (as in congestion or lack of movement).”

But the Environmental Protection Agency’s policies make it impossible to burn anything else, he said — a “governmental grid-lock” that prevents any action.
—Democrat and Chronicle (Rochester, NY), 13 Nov. 1980

”I always mention satellites and land lines and remotes like I know what I’m talking about … But really it’s like economics—when I hear about it my mind goes into gridlock.”
—The Baltimore Sun, 21 Sept. 1981

What the 1978 amendments actually did were to create a kind of gridlock the billboard industry wants.
—William Steif, Lead Daily Call (Lead, SD), 4 Sept. 1981

Although gridlock still has considerable currency in describing traffic, it has now become more commonly associated with political congestion. The success of this word, in both of its senses, would appear to be attributable to its being in the right place at the right time: We have no shortage of either vehicles or political initiatives that are slow-moving. Of course, we have also never had a shortage of people who “revile one in the manner of drunkards,” which makes one wonder how it is that debacchate has failed to catch on.