The History of 'Glamour'

Its original allure was decidedly bookish 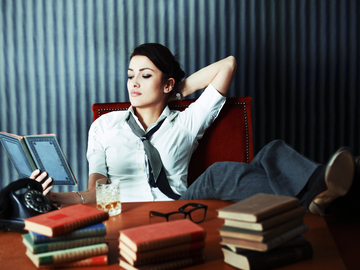 In the Middle Ages, people were suspicious of students of “grammar,” who were thought to practice the dark arts.

The word glamour comes to English from Scots, the English language as spoken in Scotland. In the early 1700s, the Scottish altered the English word grammar to create glamer or glamour; it meant "a magic spell."

The Scottish weren't the only ones to associate grammar with magic spells.

In classical antiquity the Greek and Latin ancestors of the English word grammar were used in reference not only to the study of language but also to the study of literature. In the medieval period, Latin grammatica and its outcomes in other languages were extended to include learning in general. Since almost all learning was couched in a language not spoken or understood by the unschooled populace of Europe, it was commonly believed that mystifying subjects such as magic and astrology were included in grammatica. And scholars were consequently sometimes regarded with awe and more than a little suspicion. (One of those scholars was the legendary Faust, the necromancer and/or astrologer who sold his soul to the devil in exchange for knowledge and power.)

It wasn't until the mid-1800s that the word glamour started to separate from its magical connotations—though those connotations weren't, and still aren't, entirely gone. Glamour in its modern senses—"an exciting and often illusory and romantic attractiveness" and "alluring or fascinating attraction"—still has a bit of magic to it, though not usually of the suspicious variety.