Get Looped In on 'Feedback'

Its history is more than just noise.

The English language has taken a good number of words from the realm of technology and given them non-technological senses. On some occasions words which appear to have origins in technology were actually in some generalized use well before. Such is the case with broadcast, which before it pertained to sending out television signals or other information referred to casting something, such as crop seeds, in all directions by hand. Others, such as feedback, appear to have come directly into our language as some form of techie jargon, later taking on generalized meanings. 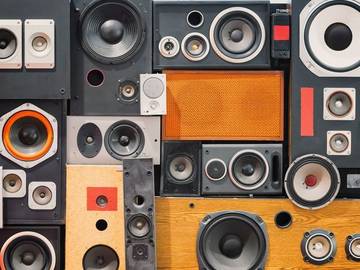 In just a century, the word has gone from highly technical to broad, general use.

Most people (especially those who are not audio buffs) think of two possible meanings for feedback when they hear the word: “a rumbling, whining, or whistling sound resulting from an amplified or broadcast signal (such as music or speech) that has been returned as input and retransmitted” or “helpful information or criticism that is given to someone to say what can be done to improve a performance, product, etc.” The initial meaning of feedback, while related to these senses, is somewhat different: “the return to the input of a part of the output of a machine, system, or process.” This use came from writing on electrical science in the early 20th century.

The secondary 20 of the transformer is connected by a feed back circuit 21 to the primary 16 of a transformer 15.
— Patent GB130432, Improvements in or Relating to Electrical Signalling Systems, 1919

Ah, technical lingo. How we love (and often have trouble following) you. Feedback, which began as an open compound noun (feed & back), appears to have come from the slightly earlier use of back combined with feed used as a verb.

When a cable grounds, the current at its end reverses; that is, flows into the cable (”feeding back”) instead of coming out of it.
— Charles Proteus Steinmetz, Journal of the Franklin Institute, Jul. 1915

The “rumbling, whining, or whistling sound” sense of the word, so beloved by guitarists with an affinity for sonic effects, did not come into use until the 1930s, as a means of describing the sounds which would occasionally result from the other sense of feedback.

Howls, screeches and feed-back microphonic noises which block quality reception have been greatly minimized or totally eliminated in practically all of the new radios now on the market.
— The Hartford Courant, 2 Oct. 1932

Further evidence of this somewhat jargonistic sense of the word may be found in an additional pair of terms from electronics: negative feedback and positive feedback. While we typically employ these today to refer to something that we either would or would not care to hear from an employer, the initial sense of each was very much in the realm of technology. Negative feedback is used with the meaning “feedback that tends to dampen a process by applying the output against the initial conditions” and that of the positive variety to mean “feedback that tends to magnify a process or increase its output.” Some of you (engineers) are nodding your heads right now. We hope you feel seen.

Question—I am operating a superdyne set which is home made, in which a reversed feed-back, by means of a tickler coil, is balanced against the positive feed-back through the capacity of the tube. When tuning in some stations I get a howl. Is it possible that this circuit is in an oscillating condition?
— The New York Times 4 May, 1924

Coupling the feed-back coil too closely to the secondary winding is not desirable, as otherwise the capacity coupling between the grid and place circuits will exceed the magnetic negative feed-back and the set will not work.
— Joseph Calcaterra, The Boston Daily Globe, 29 Dec. 1923

Of the several possible meanings of feedback the one that is probably encountered most frequently today (the one meaning “helpful information or criticism”) is the most recent. This sense began seeing use in the 1940s, often found in the field of psychology, and it was over a decade before it crept into the broadened use it currently has.

As a technical consultant, will guide field sales and customers in the most effective configuration of basic and peripheral equipment, and will provide feedback on product improvement and new product requirements to design group.
— (advt.) The Los Angeles Times 24 Mar. 1963

The earlier senses of feedback may continue to see declined use, even to such an extent that they will one day fail to be included in most dictionaries. But: this is not as much of a tragedy as it sounds. Our collective unease that some word will forever lose its meaning seems often to be driven more by a sense of splenetic whimsy than by any rational basis. The seeming effortlessness with which feedback has, in just a hundred years, transformed itself from technical lingo to highly non-technical, with a meaning that is rather far afield from its original one, serves as a useful reminder of two things: language changes, and we do not have to be angry or worried about it.