No bodices were ripped in the writing of this article

The word bodice is an alteration of bodies, the plural of body. Centuries ago, bodice and bodies both ended in the sound \s\, and were essentially indistinguishable in speech. 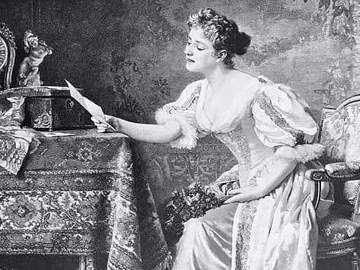 The word that launched a thousand romance novel covers

In the English language as it’s currently spoken, the word bodice refers to the upper part of a dress, especially when that part is fitted rather than loose. This is the original meaning of the word bodice, but not the word’s original form. Bodice developed as an alteration of bodies, the plural form of body. That word has various meanings, but it has since the days of Old English had its still-common meanings referring to a person’s or animal’s whole physical self, or to the main part of such a physical self, excluding the limbs and head.

Body has also, since the mid-16th century, referred to the part of an article of clothing that covers the trunk or torso, as in “the body of a wetsuit.” This use of body is a fine example of metonymy, referring to something by the name of a thing associated with it. We call what covers the body itself a “body.”

But whence the plural bodies for the upper part of a dress? A dress’s bodice is a single thing, like a skirt, right? Well, yes, but logic doesn’t hold much sway over English. And perhaps bodices of yore were less clearly singular than they are today. The word’s original referent, as the often more exacting Merriam-Webster Unabridged puts it, is to “the attached or separate waist of a woman's dress,” or to “a tight-fitting sleeveless waist or a very wide girdle often laced and worn over or forming part of a dress.” Those uses of the word date to the mid-16th century, per currently available evidence, not long after that (the Oxford English Dictionary reports evidence from the early 17th century) the word also referred to a corsetlike two-piece undergarment worn by both men and women. The front and back halves of this garment were together called “a pair of bodies.”

The words bodies and bodice sound different enough to the modern speaker that their association is opaque. This opacity is due to shifts in English phonetics, specifically to a change in the sound the plural marker -s makes. Today, when -s follows a voiceless consonant (that is, a consonant sound made without vocal cord vibration), it makes the sound \s\, as in cats, tops, and ducks. But when it follows a vowel sound or a voiced consonant, it makes the sound \z\, as in toes, crowds, and names. This was not always so. Centuries ago, the plural marker was always pronounced \s\. The current pronunciation pattern began to develop in the 14th century, but these sorts of changes can take a long time to become established, and two centuries later, the newer pronunciation pattern was not absolute. In the 16th century, bodies in the phrase “a pair of bodies” got baked into final form with the \s\ sounded plural. And by the late 17th century, the phrase “a pair of bodies” had a spelling that better reflected this pronunciation: “a pair of bodice.” Eventually the phrase fell out of use and we were left with the word bodice alone.