The words that defined the week of November 16th, 2018 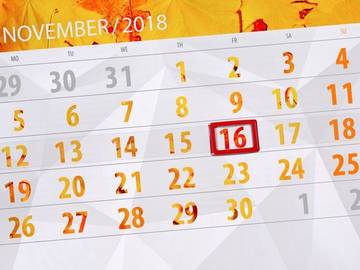 Excelsior had an extreme increase in lookups this past week, after the demise of comic book legend Stan Lee. For many years Lee would finish each of the monthly columns he wrote with this word, which is Latin for “higher” (it is the comparative of excelsus, which means “high”). In addition to its Latin meaning excelsior also has a somewhat obscure English meaning: “fine curled wood shavings used especially for packing fragile items.”

Donald Trump expressed his displeasure with the work of Special Counsel Robert Mueller’s investigative team, claiming on Twitter that “They have found no collusion and have gone absolutely nuts.”

The sense of the word nuts that Trump employed here (“insane, crazy”) is a fairly recent one, dating to the beginning of the 20th century.

Yeager had so overtaxed himself on that scorching hot afternoon that he was overcome with the heat, and one of the veterinarians of the paddock had to work over him for a couple of hours in a shed to keep Joe from going nuts and running around like a pin-wheel.
— Evening Star (Washington, DC), 23 Nov. 1907

It would be “nuts” for the attorneys in Washington to have the government records all spread out so that they could find all the old soldiers who were still entitled to 40 or 80 acres….
— Idaho Statesman (Boise, ID), 7 Apr. 1907

The blowen was nutts upon the kiddey because he is well-hung; the girl is pleased with the youth because his genitals are large.
— Francis Grose, Lexicon Balatronicum, 1811

Veterans Day was last week, and lookups for both the name of the holiday and veteran were high. We define the holiday as "November 11 set aside in commemoration of the end of hostilities in 1918 and 1945 and observed as a legal holiday in the U.S. to honor the veterans of the armed forces."

We offer a number of definitions for veteran, which may pertain to military service or simply someone with considerable experience in an occupation or skill. There is occasionally confusion as to whether someone must have been seen combat, or have served in some particular branch of the military in order to be called a veteran. While we do not set such guidelines, the Code of Federal Regulations does, and the definition from this work reads as follows:

Veteran is a person who served on active duty with the U.S. Army, Air Force, Navy, Marine Corps or Coast Guard, for any length of time and at any place and who was discharged or released under conditions other than dishonorable. Reservists or members of the National Guard called to Federal active duty or disabled from a disease or injury incurred or aggravated in line of duty or while in training status also qualify as a veteran.
— Code of Federal Regulations, Title 38 (Pensions, Bonuses, and Veterans' Relief), 2017

Jonathan Franzen received a good deal of attention this past week after a number of people of Twitter promulgated the novelist’s list of 10 writing rules for novelists (which includes at least one, “Interesting verbs are seldom very interesting,” which probably applies to promulgate). Most of Franzen’s rules deal with somewhat abstract concepts of writing fiction, but number 3 concerns itself with a specific word: then.

Never use the word then as a conjunction—we have and for this purpose. Substituting then is the lazy or tone-deaf writer’s non-solution to the problem of too many ands on the page.
— Jonathan Franzen, The End of the End of the Earth, 2018

It should be said that not everyone agrees that the then Franzen objects to is even a conjunction; many dictionaries and grammars consider the use of it in contexts such as “I sat in my chair with the book, then looked for a knife to stab it with” to be an adverb. However, among those who do feel that it is a coordinating conjunction, there is widespread feeling that this use of then is just fine.

For our antedating of the week we turn to the realm of judicial matters. For the past several months many people have found themselves using the word indictment, often with glee or disgust, depending on their political leanings. We would like to point out that in addition to indictment there is also the fine word indictee, defined as “one that is indicted,” and that this word is sorely underused. Our earliest record of indictee had until recently been from 1531, but recent findings have shown evidence of use as far back as 1527.