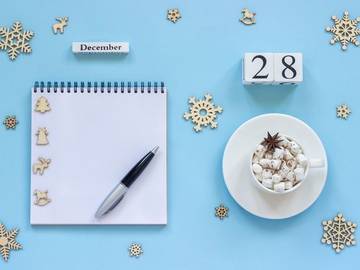 Bird box is defined in our dictionary as “a box for wild birds to nest in.” It is also the title of a movie on Netflix, a post-apocalyptic thriller in which the titular box performs a life-saving function (the captive birds alert humans to the presence of a malign ... something). The movie was issued in wide release on December 21st, after which lookups for bird box rose dramatically. To the best of our knowledge bird box has always functioned in literal fashion, and never (until now?) ventured over to the figurative terrain occupied by the canary in the coal mine or the chicken whose head has been cut off.

Osculation, an obscure word meaning “the act of kissing” or “kiss,” spiked dramatically in lookups on the evening of December 26th, after the word made a surprise appearance at the Kennedy Center Honors. Among the honorees was Philip Glass, whose 1976 opera Einstein on the Beach contains the word (paired with the word fervent), which was referenced during the presentation of the award given to the composer.

Osculation comes from the Latin osculari, and has been in limited use in English since the 1650s.

But there was never such low submission done to any Pagan Governor, as is now done to the Pope, whom the Turkes call Rumbeg, that is Prince or Lord of Rome, and the Persian Rumschah, King of Rome; for we never read that the Ethniques ever descended so low as to Foot-Osculation, which is a reverence peculiar and due only to the Pope.
— James Howell, A German Diet, 1653

Marginal attracted a great deal of attention on Christmas Eve, after President Trump used the word in a phone conversation with a 7-year-old who had called the White House.

“Hello, is this Collman? Merry Christmas. How are you? How old are you?” Trump asked the girl. Reporters could not hear the child’s responses. “Are you still a believer in Santa? ’Cause at 7, it’s marginal, right?”
— Eli Rosenberg, The Washington Post, 26 Dec. 2018

Video of the exchange was released, and in the days following there was considerable debate and conjecture regarding the precise meaning of marginal intended by Trump. This uncertainty may have been occasioned by the fact that the word has a wide range of possible meanings, and possibly was due to the word being not often found in the position of modifying a child’s belief system.

Marginal has been in use since the 16th century, initially with the meaning of “written or printed in the margin of a page or sheet.” Subsequent senses include (but are not limited to) “not of central importance,” “close to the lower limit of qualification, acceptability, or function,” and “located at the fringe of consciousness.”

The humble wall continues to be among our most searched and discussed words. This lexical prominence is due in part to the penchant of the Trump administration to employ wall as a mass noun. However, the debate over what exactly makes a wall truly wallish is also keeping this word near the top of our lookups; many people are asking ‘what is a wall?’

With a partial government shutdown stretching past Day 5, the impasse over funding a wall at the southwestern border has highlighted the debate over effective border security, with a breakthrough possibly hinging on a semantic argument: What is a wall?
— Emily Cochran & Jennifer Medina, The New York Times, 26 Dec. 2018

We aim to be of service, and believe that we can quickly answer this question. A wall is:

a (1): a high thick masonry structure forming an enclosure chiefly for defense against invasion — usually used in plural
(2): a masonry fence around a garden, park, or estate
b: a rampart of considerable height and thickness and usually great length serving as a fortification (as on a border between territories or countries)
c: a structure that serves to hold back pressure (as of water or sliding earth)
2: a vertical architectural member used to define and divide space
especially :  one of the sides of a room or building that connects the floor and ceiling or foundation and roof
3: the side of a footpath next to buildings
4 a: an extreme or desperate position — usually used in the phrase to the wall
b: a state of defeat, failure, or ruin — usually used in the phrase to the wall
5 walls plural: a physical, intellectual, or spiritual area of influence
6 a: the external layer of structural material surrounding an object
— often used in plural
b (1) : one of the surfaces of country rock lying adjacent to a vein, ore deposit, or coal seam (2) : one of the surfaces of a geological fault zone
7 a (1): something resembling a wall in appearance  (2): something that resembles a wall in function
especially by establishing limits or providing defense
b: something immaterial or intangible that acts as a barrier to communication, understanding, or accomplishment
8: the arrangement of tiles previous to the drawing of hands in a Mah-Jongg game.

We trust that the current anxiety over the definition of wall is restricted to its use as a noun, because if we had to also include all the verb and adjective senses things could get a bit complicated.

Our Antedating of the Week: Bone spur

Bone spur is our antedating of the week, prompted by the attention brought to this word by a report in The New York Times.

In recent years, the diagnosis of bone spurs has subjected Mr. Trump to ridicule from critics, who have found it implausible that a healthy and athletic 22-year-old, on the cusp of being declared fit for service, could suddenly be felled by growths in his heels.
— Steve Eder, The New York Times, 26 Dec. 2018

Our earliest citation had previously come from 1957, but recent findings show that bone spurs have been plaguing the English-speaking people since at least 1914. The earliest use we now have refers to a bone spur found in the nose; by 1921 the dread bone spur of the foot was part of our language.

Troublesome Bone Spurs. “I have become much interested,” subscriber writes, “in your articles, which have covered a large range of ills to which the human body is heir, but I have not noticed any mention of calcaniel spurs, which occur sometimes on the bones of the feet and other times on other parts of the body.”
— Chicago Daily Tribune, 15 Mar. 1921