The words that defined the week of November 2nd, 2018 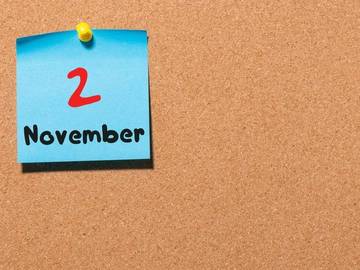 Let this be a reminder that Halloween candy is now half-price.

Politics continued to be the driving factor behind many of our lookups this week. Concertina wire received more attention than it customarily receives, after Donald Trump announced plans to send large amounts of it (along with troops) to the Southern border of the US.

Soldiers arriving at the border were bringing 22 miles of concertina wire and would have another 150 miles available, O'Shaughnessy said.
— David S. Cloud, Los Angeles Times, 30 Oct. 2018

Concertina wire, despite taking its name from a musical instrument, is not particularly musical stuff. We define it as “a coiled barbed wire used as an obstacle” (the concertina is a member of the accordion family, and is played by expanding and compressing a set of bellows). Although barbed wire has been used since the 19th century, the word concertina wire dates from the First World War.

The Boches are fond of using what we call ‘concertina wire.’ It catches round your legs, and then strings out and holds you up.
— The Scotsman (Edinburgh, Scot.), 30 Apr. 1917

Although concertina was applied most often to the wire, it was also used during this war to refer to the trenches themselves.

Outlines of trenches ran from the bottom of these valleys right up to the summit of the ascents, and had been nicknamed by the “Tommies” “concertinas,” owing to their peculiar extending zig-zag formation.
— The Manchester Guardian (Manchester, Eng.), 8 Mar. 1915

Birthright and citizenship were both in the news throughout the week, after Trump spoke of his desire to repeal the Fourteenth Amendment to the Constitution of the United States, via executive order (a move which many say is unconstitutional). The Amendment itself does not contain “birthright citizenship,” although the words were used in conjunction with each other at this time.

Every individual holds it, not from any grant of purchase made by the State in which he lives,—not from any concession from the States collectively, or anything representing them, not by any reservation made on his behalf,—but from that original birthright citizenship which made the States, the nation, and the Union, as all alike one harmonious indivisible work, proceeding from one and the same working power.
— The Buffalo Commercial (Buffalo, NY), 25 Oct. 1864

Birthright (“a right, privilege, or possession to which a person is entitled by birth”) and citizenship (“the status of being a citizen”) are both considerably older, in continual use in English since the 16th century.

…and that there be no fornicator or vnclene person as Esau which for one breakfast solde his birthright.
— William Tyndale, The Newe Testament, 1534

And whensoeuer the Tyraunts of this world shall driue vs out of our landes or possessions, let vs remem|ber that wee are not tyed to anie certaine lande in this worlde and that our Citizenship is in heauen.
— Daniel Tossanus, _The Lamentations and Holy Mourninges of the Prophet Jeremiah, 1587

Today in Miami, John Bolton will announce a new policy toward Latin America to confront the governments of Cuba, Venezuela and Nicaragua, calling them the “Troika of Tyranny.”

The word is a borrowing of the Russian troĭka (from troe, meaning “three”), has been in English use since the mid-19th century. The first meaning was “a Russian vehicle for three horses abreast”; in the middle of the 20th century it took on the sense in which Bolton was employing it, which is “a group of three; especially, an administrative or ruling body of three.”

Many people turned to a dictionary in order to reacquaint themselves with the meaning of firearm, after Donald Trump said something which appeared to be equating rocks with these weapons.

Asked if he envisions the US military firing at migrants at the border, President Trump says: "I hope not."

"I will tell you this, anybody throwing stones, rocks ... we will consider that a firearm, because there's not much difference when you get hit in the face with a rock." pic.twitter.com/mnsc56EFT7

For those of you who are coming late to this, we define firearm as “a weapon from which a shot is discharged by gunpowder —usually used of small arms.” While rock occupies a much broader semantic field than firearm, the sense which Trump appears to be using (“a concreted mass of stony material; also, broken pieces of such masses”) has very little overlap with firearm.

For the antedating of the week we will turn away from the world of politics, and focus instead on political shenanigans. The word scheme was pulled from the quiver of many a political journalist and headline writer this week, after a pair of men claimed to have evidence of past sexual misconduct by Robert Mueller. There appears to be widespread skepticism regarding the veracity of these claims.

Special counsel Robert Mueller has asked the FBI to investigate an alleged scheme to manufacture sexual assault stories about him.
— Politico (politico.com), 30 Oct. 2018

We define this sense of scheme as “a plan or program of action; especially, a crafty or secret one.” However, the word has a significant number of other meanings, including “a graphic sketch or outline,” “a design,” and “a mathematical or astronomical diagram.” The oldest known meaning of the word, now obsolete, is “a figure of speech,” and our earliest evidence for this had been from 1553. However, recent findings have pushed this date back to 1540.