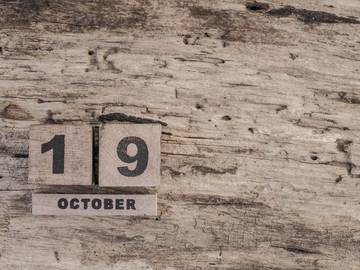 Getting close to Halloween. How you doing on that costume?

Horseface (“a long homely face”) was among our trending words this week, after one person thought it was interesting to use the word in reference to another person, via a social media platform that lends itself well to invective. The word falls into neither the new nor the inventive categories of insults in English. Our records indicate that it has been in use since the late 16th century.

My selfe did laugh, to sée my painting clearde,
The straung defects, that withered age did bring,
A horseface then, a tawnie hyde appearde,
A wrinkled mumpes, a foule mishapen thing,
A sea of hate, where liuely loue did spring,
Thus beauties beames, to clowdes of scorne to chaunge
So soone, mée thought was sure a myrrour straunge.
— George Whetstone, The Rocke of Regard, 1576

Whistleblower was in a large number of news stories this week, due in large part to coverage of the arrest of Natalie Mayflower Sours Edwards, an employee of the Treasury Department. Prosecutors have charged her with leaking Suspicious Activity Reports (commonly referred to as SARs); Edwards says that she is a whistleblower, which we define as “one who reveals something covert or who informs against another.”

After initially denying her role, Edwards confessed, but said she didn't know the information would be published, and described herself as a "whistleblower" who took the reports for "record keeping," prosecutors said.
— Newsday (Long Island, NY), 18 Oct. 2018

The word is a fairly recent addition to English, at least insofar as its “revealing” sense is concerned. This meaning dates from the 1960s, and for several years was overshadowed by the sense meaning “one who blows a whistle; especially a referee in a sporting contest.” However, possibly through association with the Watergate scandal, whistleblower soon became associated primarily with exposés, and that now is the only commonly used meaning of the word.

President Trump made one of his occasional forays into the heady world of etymology last week, holding forth in an interview with the Associated Press on the origins of the word sow.

Trump to AP: "I often hear that Russia likes to sow discord. The word is 'sow,' an old English term."

While we applaud the efforts of anyone who wishes to bring the etymological dark arts closer to the people, this is perhaps not the most accurate way of describing sow. The word, which has meanings such as “to plant seed for growth especially by scattering” and “foment,” does indeed come from Old English, but in that language would typically have been rendered as sāwan.

NPC, an acronym for “non-player character” (or “non-playable”) borrowed from the world of gaming, is not yet entered in our dictionary. However, it is a word we are watching, and the word gained a good deal of the currency necessary for inclusion in a dictionary (actual use in print) last week.

Twitter has barred hundreds of right-wing accounts for posing as soulless, “nonplayable” liberal activists. @KevinRoose explains the NPC meme, what it means and why it’s causing trouble. https://t.co/CaK4xWWbEU

The non-acronymic form, non-player character, has been in use now for several decades, and may be found in extensive use in the jargon of gamers, of both the electronic and non-electronic variety.

We believe that in not being able to identify player from nonplayer character that the game will be far better for everyon (sic).
— rec.games.pbm, 13 Sept. 1992

For our antedating of the week we look to the world of political news and scandal. Lanny Davis, the current lawyer for Donald Trump’s former lawyer, Michael Cohen, was quoted by USA Today as saying he had “two words” for the President, and that these words were audio and tape.

Some nitpickers have pointed out that audiotape is one word, not two, and we have to admit that this is how we enter the word. There is, of course, always the possibility that Davis was referring to two distinct objects, one of which is audio and the other tape, in which case they would be two words. Furthermore, (and we are not taking sides here) we must also point out that our brand-new earliest record for the term audiotape (pushed back to 1948 from 1951) does spell it as two words.

Within a few short years the compound has closed up, perhaps due to it serving as a trademarked product.

To make professional-quality recordings every time, be sure to use Audiotape — available with red or black oxide on plastic or paper base.
— See and Hear: the Journal on Audio-Visual Learning, Fall 1950

In case you are interested in having an argument with someone about this on Twitter here is what you need to know: audiotape is now the far more common spelling, although audio tape has some historical resonance, and the word has been around since the late 1940s.