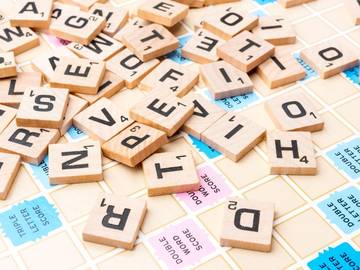 The 2018 North American Scrabble Championship was held this past week in Buffalo, NY, bringing together a splendidly improbable group of letters (and the people who wield them like stilettos). Prizes of up to $10,000, and everlasting glory, were awarded to this year's winners. Perhaps, reading this, it has occurred to you that you might enter this tournament next year, in the hopes of scoring some of this filthy lucre; we would like to take this opportunity to crush your dreams, by listing some of the words employed in the final match of one of the two elite divisions.

Nigel Richards, five-time US champion, lost his final game this year, with an assembly of words which included liefest, toph, alidade, and echoey. His opponent, Joel Sherman, won the national championship for the second time, playing the following words in this match: lurdans, zep, trave, and big.

Space force, a pairing of nouns not yet common enough to merit inclusion in any mainstream dictionary, got a fair amount of press over the past few days, after officials in the Trump administration unveiled further plans to create a branch of the military charged with exerting force in, well, space.

"Comments last week about the potential for leveraging AMC capabilities in the space domain have nothing to do with the possibility of a future space force," Maj. Bryon McGarry, an Air Mobility Command spokesperson, told The Daily Beast.
— David Axe, The Daily Beast (thedailybeast.com), 9 Aug. 2018

While it is not uncommon for force to form the second portion of compound nouns in English (of both the open and closed variety, such as air force and workforce), it remains to be seen whether space will prove to have the requisite lexical stickiness to join their ranks.

Epiphany (from the Greek epiphainein, "to manifest") took a turn in the sun on August 9th, after the word served a titular role in the trailer for a song from the forthcoming album of K-pop group BTS. Based on the lyrics currently available, the sense of the word employed here is "a usually sudden manifestation or perception of the essential nature or meaning of something." Epiphany has several other senses; the earliest one ("January 6 observed as a church festival in commemoration of the coming of the Magi as the first manifestation of Christ to the Gentiles or in the Eastern Church in commemoration of the baptism of Christ") typically spikes in lookups every year in early January.

Deplatform, a verb so new and shiny that people have not yet got around to voicing their distaste for it, saw greatly increased use this week, after Alex Jones of Infowars was reported to have been restricted in his access to post on a variety of social media sites.

Deplatforming generally refers to the attempt to boycott a group or individual through removing the platforms (such as speaking venues or websites) used to share information or ideas. Please note that this word is, as mentioned previously, still quite new, and therefore may be, as lexicographers have been known to say, of fluid meaning and application.

Whether or not de-platforming Greer was the right decision, the backlash against her comments are evidence of attitudes changing for the better.
— Lydia Smith, International Business Times (ibttimes.co.uk), 27 Dec. 2015

International political relations drove a spike in lookups for draconian, after Russia protested mightily against U.S. plans to impose new sanctions for the poisoning of Sergei Skirpal, alleged to have been committed by Russia.

Russia condemned new US sanctions as "draconian" on Thursday after news of the measures sent the rouble tumbling to two-year lows and sparked a wider asset sell-off.
— Al Jazeera (aljazeera.com), 9 Aug. 2018

Draconian may be used to mean "Cruel, severe" or "of, relating to, or characteristic of Draco or the severe code of laws held to have been framed by him." The Draco in question was a 7th-century B.C. Athenian legislator, who by most accounts was somewhat over-strict in his interpretation of the penal code (minor offenses could be punishable by death). We have been referring to laws as draconian since the 18th century.

And finally, for our antedating of the week we turn to the weather. It's that time of the summer when one cannot go more than an hour before bumping into some blatherskite who wants to yammer on and on about how humid and muggy it is. Don't be that person ... instead you can be the person who bores the weather-chatting blatherskite to tears, by informing them that the word muggy comes from the English dialect word mug (meaning "drizzle"). Furthermore, while we have previously considered 1728 to be the earliest known use of this word, recent research has shown that it was in use as far back as 1656. For it was in this year that Richard Short used the word (with a meaning seemingly closer to "drizzly" than to "humid") in his justly famous Peri psychroposias (full title: of drinking water against our novelists, that prescribed it in England : whereunto is added, peri thermoposias, of warm drink, and is an answer to a treatise of warm drink):

"In muggy, and foggy weather candles burn not so clear, for then we see about them ... that is a spongious concrescence about the snuffe."