Welcome to The Good, The Bad, & The Semantically Imprecise, in which we look over some of the words that tickled your curiosity over the past week. Please note that the word bad is used here in a semantically vague fashion; we do not really think of any words as bad (although sometimes they are a bit unruly). 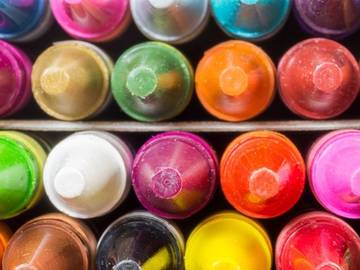 How do you say it?

A viral video brought crayon much more attention than it's used to this week, culminating with Crayola earning a healthy dose of lexicographic side-eye when they said some stuff about us on Facebook. To wit:

“Merriam-Webster Dictionary states the proper way to pronounce crayon is in two syllables, krA on.”

First of all, we give three distinct pronunciations (\ ˈkrā-ˌän, \ ˈkrā -ən, and ˈkran ). Second, at no point do we say that any of these are the “proper way” to pronounce the word (when providing multiple pronunciations we give the most common one first). We don’t have a third point to make, so will instead reprint some relevant information from the Guide to Pronunciation section of our dictionary’s front matter.

Readers often turn to the dictionary wanting to learn the exact pronunciation of a word, only to discover that the word may have several pronunciations, as is the case for deity, economic, envelope, and greasy, among many others. The inclusion of variant pronunciations disappoints those who want their dictionary to list one “correct” pronunciation. In truth, though, there can be no objective standard for correct pronunciation other than the usage of thoughtful and, in particular, educated speakers of English. Among such speakers one hears much variation in pronunciation.

(We love you Crayola - please don’t take that first bit seriously. We look at you front-eye.)

Move the goalposts moved itself a considerable degree in our lookup rankings this past week, after a number of people seemed to feel that Rudy Giuliani was doing just this in defending his client, Donald Trump.

Team Trump is moving the goalposts in plain view:https://t.co/YtbeemsQRS

The use of this phrase is largely figurative (as actual goalposts are rarely moved), and has been in use since the 1920s. Sometimes the goal posts are moved, and other times they are shifted. The earliest use we know of for this term is, quelle surprise, in a political context.

But his personal view was that a change had taken place, and the Liberals, having been beaten, not only wanted to change the rules of the game, but wanted to shift the goal posts because they could not play any more. That was a rather feeble attitude.
— The Scotsman (Edinburgh, Scot.), 3 May 1924

In other politically-driven news about words, Donald Trump drew some additional attention to the word rig when he wielded the past-participle form of the word in a tweet.

Rig is a highly polysemous word (it has many meanings), and may function as a verb or a noun. The adjectival sense in which Trump appeared to use the word comes from the verb sense of “to manipulate or control usually by deceptive or dishonest means,” which has been in English since the early 19th century, in initial use mainly referring to business practices. The “dishonest” sense of the verb is preceded by the noun form of rig, (“a swindle”), in use since the 17th century.

Yes, I was told that there would be a “rig” in the market [a laugh]; but the public had seen the operations in the Lower Rhine Company, and no bears could be caught.
— The Observer (London, Eng.), 31 Oct. 1825

And for our antedating of the week we will turn to the heady and turbulent world of ecclesiastical change. Pope Francis caused a spike in look-ups for the word inadmissible this past week when he declared “the death penalty is inadmissible because it is an attack on the inviolability and dignity of the person.” This statement by Francis also increased reader interest in the the word inviolability.

While our records show use of inviolable since the 15th century, inviolability seemed to not come up until the end of the 18th. However, recent findings show that inviolability has been used in writing (in a religious context as well) since at least the 1640s.

Here are Gods Letters Patents for the Kings Inviolability. But alas, an Ordinance of this Parliament can nullifie these, and warrant Hammonds violence unto his Majesty.
— Anon. The Fatall Blow; or, The Most Impious and Treasonable Fact of Hammond, in Offering Force unto, and Hurting his Sacred Majesty, 1648