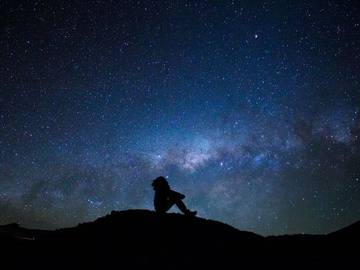 Some of these are fairly literal cases, in which the word for star in some other language is imported into English and given new significance. As with étoile, which came from French, and initially had the meaning “a star or a pattern in the shape of a star.” The word later took on a more figurative sense, and assumed the meaning of “a principal dancer in a ballet company.”

In a number of other cases the word began its life in English with more of a connection to star, as with stellar, which comes from the Latin stella (“star”). This word first had the meaning “of, relating to, or derived from the stars,” although in current use more often is employed to mean “outstanding, first-rate.”

Whereby it appeareth, that it is the contractive act of JEHOVA, in his property of ELOHIM, which immediately effecteth these things, by means of his Boreall organs, which are first angelicall, next stellar or starry bodies, being animated by the angelicall.
— Robert Fludd, Mosaicall Philosophy, 1659

Given that our language draws from a wide range of sources to create its vocabulary, and given that many of these languages have multiple words for star, it's no surprise that disparate forms of this word serve as the base for a range of English words. The Latin word for “star, constellation” (sidus) gave us a number of words, including inconsiderate, desire, and the somewhat less common siderate. This last word is defined as “to blast or strike down (as with lightning),” but has an unfortunate tendency to show up in early medical writing, used in a figurative manner to describe inner parts of the body.

…the Intestines were syderated, or blasted and corrupted, as if sphacelated; and the humour that did distend the Belly, was very bloody: and he relates no other Cause of the Dropsie in this person.
— William Drage, A Physical Nosonomy, 1664

Another Latin word for “star” (astro) finds itself as the initial portion of many of our more common star-related words, such as astronomy and astronomize (“to discourse on astronomy; talk astronomically”). But it also gave us disaster, which in early use could refer either to “a sudden calamitous event” or “a baleful aspect of a planet or star.”

That blount of wyt we feele not now,

And that we see, and wil not see,

How wayward fortune spornes.
— Thomas Jenny, A Discours of the Present Troobles in Fraunce, 1568

…as he attended in this sort the gift of a better occasion, beholde thapproch of the second desaster or tragedye of the vnhappe Montanino.
— Matteo Bandello (trans. by Geffraie Fenton), Certain Tragicall Discourses, 1567

My desaster should be death, and my life not enioy my liberty, vnlesse to lincke with him in loyalty, and to yeeld him that patrimony, which al true Louers merite.
— Austin Saker, Narbonus, 1580

And seeing your old age perplexed with strange passions, staied as one willing to learne what disaster hap hath driuen you into these strange dumps, which if I without offence may request, and you without preiudice grant, I shal find my selfe by duty bound to requite your vndeserued curtesie.
— Robert Greene, The Anatomie of Fortune, 1589

There are some words which come from the stars, and by dint of the way that language works, have taken a path which has brought them far enough from these roots that they are almost unrecognizable. Flu is a shortening of influenza, which itself comes to our language from a word in Medieval Latin meaning “influence,” due to the idea that epidemics such as the flu were caused by the influence of the stars.

Stars: they’ve got a lot to answer for.