The Erstwhile Meaning of 'Erstwhile'

The word can mean either 'former' or 'formerly'

The word erstwhile is occasionally described as "literary." Based on the manner in which erstwhile is used, it would appear that "literary" has an as-yet-unrecorded meaning which amounts to “using a fine sounding word which I think my audience will not understand.” 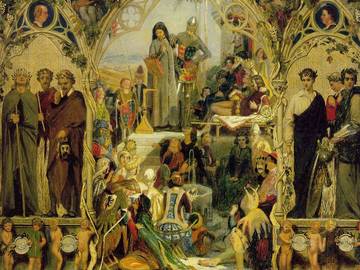 Usage guides will sometimes list 'erstwhile' together with 'whilom' and 'quondam', informing readers that, while all three of these words are really kind of pretentious, you’re probably best going with 'erstwhile'.

However, erstwhile is not a terribly difficult word to understand, except when it is used improperly; it means “former” when used as an adjective, and “formerly” when used as an adverb (which doesn’t happen very much anymore). Erstwhile comes from the Old English words ær (“early”) and hwīl (“while”). The adverb use came first, with our earliest evidence of this occurring in 1569.

That which erstwhile so pleasaunt scent did yelde,
Of Sulphure now did breathe corrupted smel.
—Edmund Spenser, A Theatre Wherein be Represented as wel the Miseries & Calamities that Follow the Voluptuous Worldlings, 1569

Crime, I care not about confessing to; but even I am loath to confess the gross absurdity of my erstwhile sincerity of feeling and zeal for the liberty of those past-saving slave and petty tyrants – Mankind.
—WTH, The Monthly Magazine, Dec. 1838

If you occasionally use erstwhile, and find that your audience is not sufficiently confused, there are a number of other English words which you may use instead. The word umquhile is used chiefly in Scottish English (and is rare enough in that variety), and means “former” or “of old.” Whilom is another synonym for erstwhile, and is very likely to confound your listeners. And should you need yet another word to achieve the proper level of inscrutability, there is always quondam (“former, sometime”).

Usage guides will sometimes list erstwhile together with whilom and quondam, informing readers that, while all three of these words are really kind of pretentious, you’re probably best going with erstwhile, since it is the most common of the lot. Most usage guides are replete with this sort of common-sense advice on how to effectively communicate in English. Occasionally, one of them will drop the ball, as may be seen in the following entry on erstwhile (reprinted in its entirety) found in one of the classic guides to English usage, by Henry Watson Fowler.

erst, erstwhile. See PEDANTIC HUMOUR, & VULGARIZATION. Incidentally, it may be mentioned that amongst Smithfield men ‘boneless bag meat’ has completely ousted the sausage from its erstwhile monopoly of jest & gibe.
—H. W. Fowler, A Dictionary of Modern English Usage, 1926

Even if one is a fan of Fowler, it is difficult to see how an entry that focuses primarily on pedantic humor and references to ‘boneless bag meat’ will further an understanding of erstwhile. So here is all you need to know: erstwhile formerly meant “formerly”; now it is mainly used to mean “former.”