The Difference Between 'Centenary' and 'Centennial'

The richness of English vocabulary is partly due to the historical accident that gave us words that have similar meanings but different languages of origin. It’s how we got many synonymous pairs with one word from Old English roots and one from Latin roots, like motherly and maternal, answer and response, and begin and commence.

Different words that do share etymological roots often have subtle differences in usage that have more to do with convention than semantics: we say “historic occasion” but “historical society,” “antique furniture” but “antiquated technology,” “enormity of the crime” but “enormousness of space.” 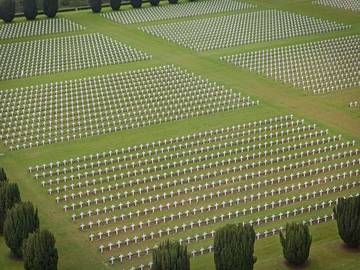 'Centenary' is more popular in British English, while 'centennial' is preferred in the United States.

There are also pairs of words that evolved in slightly different directions from a shared root, such as perspicacious which means “perceptive” and perspicuous which means “clear, easy to understand,” two variations on the meaning of their Latin ancestor perspicere , which had the meaning “to see through.”

A synonymous pair that derives from the same ancient source without a difference in meaning is a bit more uncommon, but that’s exactly (and fairly obviously) what we find with centenary and centennial, words that mean “a 100th anniversary or its celebration.” Both words can be used as adjectives as well as nouns. They ultimately derive from the Latin word centum meaning “hundred,” but they took different paths into English.

Centenary is the older word in English, having derived directly from the Latin word centenarium in the 15th century. The English word has had several meanings, including “a weight of 100 pounds” (a meaning that is now obsolete) and “a period of 100 years” (a synonym of century that is also obsolete in modern English).

Centennial dates only to the 18th century, and was formed from the Latin word for “one hundred,” centum, with the -ennial suffix derived from the Latin annus meaning “year” and also seen in words such as biennial, millennial, and perennial.

It’s interesting to note that a third variation also exists: centennium has occasionally been used to mean both “a period of 100 years” just as millennium means “a period of 1000 years,” and “a 100th anniversary,” but its use is so rare that it is only included in the historical Oxford English Dictionary.

The use of centenary and centennial for commemorations of anniversaries is relatively recent: in his 1755 dictionary, Samuel Johnson only defined centenary as “the number of a hundred” as in “a centenary of years,” and Noah Webster added centennial in 1828 without the “anniversary” meaning:

The “anniversary” meaning for both centenary and centennial dates to the very late 1700s, and the two words took root differently on both sides of the Atlantic: centenary is the preferred term in British English and centennial is more commonly used in the United States. Centenary is also pronounced differently in British English, where rather than /sen-TEN-ery/ it is pronounced /sen-TEEN-ery/.

Despite regional differences, centenary and centennial show nearly equivalent frequency in the Google Books corpus, but, largely because of the 1976 celebrations, bicentennial is much more frequent than bicentenary. The younger country seems to make a bigger splash for its birthdays.