The Colorful History of 'Miniature'

The word wasn't originally about size

Some words take a rather circuitous route to reach their modern English meanings, starting out in another language with a meaning entirely different from the one they eventually settle into. Take the word miniature, for example. Its Latin ancestor concerned not size, but color. 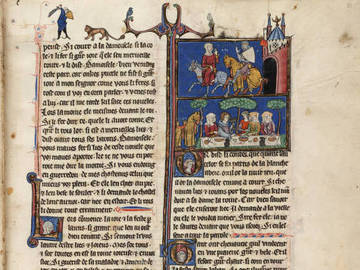 In early Italian, the association of decorative drawings with miniare was so strong that the meaning of 'miniare' was broadened until it meant "to decorate a manuscript."

In the era before the invention of the printing press, anything printed was printed by hand: someone pressed pigmented point to surface and left marks there. Mostly people used black pigment, but sometimes they used red, especially for titles, large initial letters, and decorative drawings. The Latin name for the red coloring—which was either cinnabar or red lead—was minium, and the corresponding verb meaning "to color with minium" was miniare.

In early Italian, the association of decorative drawings with miniare was so strong that the meaning of miniare was broadened until it simply meant "to decorate a manuscript." A noun form of the word, miniatura, was used to refer to the art of illuminating—that is, of adding illustrations to—a manuscript, regardless of the colors used. Since the illuminations in manuscripts (as the illustrations themselves are called) were small by comparison with most other paintings, miniatura came to refer not only to a manuscript illumination but to any small portrait or painting, and eventually to anything very small. The word was borrowed into English in the late 16th century as miniature.