The Appetizing Origins of 'Slush Fund'

There are many words in English which are borne of interesting food and drink etymologies. For the most part people like to hear these stories, so if at a dinner party you can find a way to mention one (such as that symposium comes from a Greek word meaning “to drink together,” or companion has a root of “person to eat bread with”) then your host is likely to say “what a charming and witty person this is! I must invite them back to all my future soirees.” And then there are words such as slush fund, which has more of a “leftover rendered fat” kind of backstory, and will probably not make you a return guest for many dinners.

How did slush fund go from “rendered fat” to its current iteration of “bribe money”? Let’s take a look. 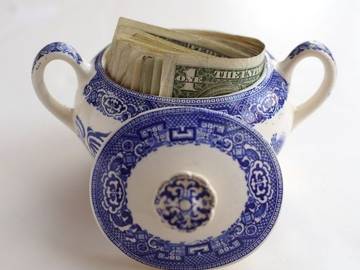 Slush has had the meaning of “refuse grease and fat from cooking especially on shipboard” since the middle of the 18th century. You personally may not think of old bacon grease as a particularly useful commodity, but the manufacture of many things, such as candles, was dependent on such material.

…and it is told that we had not an inch of candle, nor a morsel of slush to make any, having long since eaten up every appearance of either which could be could be found….
— David Harrison, The Melancholy Narrative of the Distressful Voyage and Miraculous Deliverance of Captain David Harrison, 1766

The slush would be collected on voyages and stored until a ship reached shore, at which point the entire nasty mess of it was trucked off and sold. The money from the sale of slush was reserved for the crew of the ship, and would be used to purchase items, such as musical instruments or books, which were not considered necessary enough that a country’s navy, or a ship’s owner, had to provide them for a crew. In the beginning of the 19th century this accreted money began to be called a slush fund.

On the first opportunity that occurred, other iron hoops, greater it is believed in number, were purchased from what is called the Slush Fund, and restored to the ship to replace those taken as aforesaid.
— Daily National Journal (Washington, DC), 2 Sept. 1825

Again, he ran on shore in the harbor of Toulon, where assistance was rendered by the commanding officer of that station, and it was said that a subordinate officer was paid, from the slush fund, $100, for his services, although acting under the orders of his superiors.
— The New York Herald, 31 Jul. 1841

In the course of a year, on board one of our large frigates, some fifteen or twenty barrels of slush is taken from the cooking apparatus, and sold for the purpose of creating the “slush fund.”
— Daily National Intelligencer (Washington, DC), 1 Apr. 1852

SLUSH FUND. This fund is raised by a disposal of the slush, on board our vessels of war; and as it is a component part of the crew’s ration, it in the strictest sense of justice ought to belong to them.
— Army and Navy Chronicle (Washington, DC), 10 Mar. 1836

By the middle of the 19th century the term had moved from the specialized lexicon of sailors, and was being used in generalized language. In its initial non-nautical use slush fund appears to have had no connection with illicit funds or bribery, and instead simply referred to a source of money for general purposes which was contributed to through the sale of small items or goods.

The polite Commissary informed us that they received twelve dollas a barrel for the grounds, and thus added materially to the “Slush Fund.”
— Fort Wayne Gazette (Fort Wayne, IN), 12 May 1864

This work was designed by Commander Richard W. Meade, and the labor passed through his hands; and upon these grounds he has, through the aid of the “slush fund,” erected a number of buildings, consisting of a laundry, bowling alley, printing office, barber’s shop, contraband quarters, carpenter, cooper and blacksmith shops; target ground and brickfender wall—in fact, a little village.
— The New York Daily Herald, 29 Mar. 1864

It did not take long, however, for slush fund to take on a new meaning, one that has very little, if anything, to do with the sale of leftover cooking grease. In the late 1860s the word began to see use in the sense “a fund for bribing public officials or carrying on corruptive propaganda.”

The St. Louis Republican of the 14th publishes the reports of the Legislative Committees on the sale of the Iron Mountain railroad, with this caption: “Terrible record of frauds. Criminal conduct of several parties. The State swindled out of a million dollars. How to buy railroads. What is a slush fund?”
— The Public Ledger (Memphis, TN), 16 Mar. 1867

After referring to the evidence that a “slush fund” of $10,000 had been raised by the “ring” for use where it could be made available in furthering their scheme—in bribing officials?—this report says: We now approach an individual, to whose conduct in these transactions the attention of the public has been chiefly directed.
— The Selma Weekly Messenger (Selma, AL), 30 Mar. 1867

The word has continued its semantic broadening since the 19th century, and now has the additional meaning of “an unregulated fund often used for illicit purposes.” The majority of uses are of this and the bribery senses, and the “sale of refuse” sense is now almost entirely a historical curiosity. You could always try to resurrect its use the next time you meet up for cocktails, but you may run the risk of having to drink alone the time after that.