In past years, in the run-up to Election Day, you might have spent time volunteering at a phone bank, calling people to encourage them to get out and vote.

If you haven't, then you might have received a call from such a volunteer yourself. 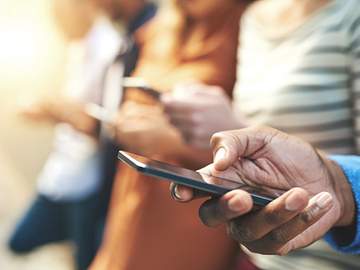 "Would you chip in $3 to buy Merriam-Webster editors a coffee?"

The bank in phone bank is defined in the dictionary at the third homograph entry for bank: "a group or series of objects arranged together in a row or a tier … such as: a row or tier of telephones."

The notion comes from workers in call centers sitting side by side, the telephones (back in the days of landlines) spaced out along a table, like you might remember (if you're old enough) from watching telethons in the 1980s.

By the mid-1990s, phonebank had emerged as a logical verb for calling or receiving calls from a phone bank:

"They could have poured money into the Morales candidacy. They could have come through with voter registration efforts, with mail-outs, with phonebanking, with all the nitty-gritty work that goes into insuring a strong, across-the-board Democratic turnout."
— Linda Camarillo, quoted by Lori Rodriguez, The Houston Chronicle, 7 Nov. 1996

(A different kind of phonebanking—as in using financial services over the telephone—was already seeing occasional use by then.)

With newer technologies in place, strategies for getting out the vote have changed, and so a new word has surfaced in the language:

But Covid-19 has supercharged texting as a campaign weapon, turning virtual text-banking — where volunteers coordinate their messages and share tips while sitting comfortably at home — into this year’s equivalent of knocking on doors or stuffing envelopes.
— David Ingram, NBCNews.com, 29 Oct. 2020

So, you’ve already voted, and taken your selfie at the ballot drop box, and maybe you’ve even text-banked and written letters to voters in swing states, and you’re still on pins and needles about the upcoming Election Day—what’s a politics junkie to do?
— Julia Silverman, Portland Monthly, 24 Oct. 2020

Textbanking is the act of sending text messages to a large number of recipients to spread a message. Unlike with phonebanking, which alludes to a line of telephones in a row, there really is no such thing as a physical text bank. With cell phones and mass-text software, of course, people who are texting others in large quantities don't need to sit together in the same place, so the "bank" part of the word doesn't really apply anymore.

Nevertheless, the noun phrase text bank is seeing use for texting parties—that is, parties where people get together to text others (such as to request donations):

Eleni Kounalakis, a Democrat running for lieutenant governor in California, is sitting on a couch in San Francisco, introducing herself to about one voter per second. Stylus in hand, she’s hosting a “text bank” with volunteers and using an app called Hustle to rapid-fire her platform — along with appeals for support — straight to voters’ cellphones.
— Katy Steinmetz, Time, 24 Oct. 2018

Eight months pregnant with her first child — a little girl — Amanda Padilla imagined a world where the rights she enjoys as a woman could be rolled back without Ruth Bader Ginsburg as a bulwark against conservative members of the U.S. Supreme Court. So she got active, signing up for phone and text banks to reach out to other women from her suburban Bloomington home.
— Briana Bierschbach, The Star Tribune (Minneapolis), 25 Sept. 2020