The combining form we need now more than ever.

Tele- is a versatile prefix that generally refers to covering distances. It is most often seen in the words telephone or television, which carry sound or images over long distances, but has been adapted to new ways in which interactions are being mediated over distance, such as telemedicine, teleconference, and tele-townhall, which are all remote in practice. 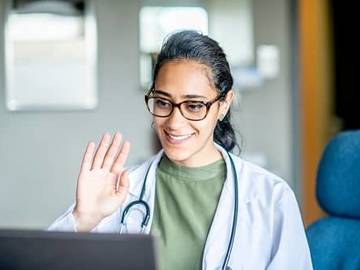 'Tele-' originated in the Greek adjective 'tēle,' meaning “far off.”

In the age of COVID-19, we are seeing the combining form tele- used in even more new and creative ways as technologies such as Zoom and Skype allow parties to communicate while remaining distanced.

The City of San Antonio Parks and Recreation Department has scheduled a public tele-hearing Thursday afternoon on a proposal to change the name of Columbus Park to Piazza Italia.
— Elizabeth Ruiz, KTSA.com (San Antonio, Tex.), 15 July 2020

Chaplain Randy Booth is not sure “tele-chaplaincy” is a word, but it might be the best way to describe a new way to keep people connected during the pandemic. With help from a private donation, SSM Health bought iPads for each of its hospitals across Wisconsin, Illinois, Missouri and Oklahoma so chaplains can help patients bond with family and friends, Booth said.
— Ashley McCallum, GazetteXtra.com (Janesville, Wisc.), 28 June 2020

Tele- is about covering distances. It originated from the Greek adjective tēle, meaning “far off,” but its familiar use in the names of inventions in long-distance communication is a New Latin coinage.

The telegraph was invented to send written (coded) messages from one place to another along a wire. The telephone achieved the same thing with sound. The television captured images from far away and brought them into the home over the airwaves. The popularity of the last two items in homes in the 20th century helped to make tele- a familiar concept.

The tele- combining form was then extended to terms for things that are carried out by these devices. You would receive a telegram via a telegraph; you could watch a telethon on your television; or you could be annoyed at home by a telemarketer calling you on the phone.

As computers and internet technology allowed us to communicate with our offices, we were able to do more and more jobs from home. The verb telecommute was coined to serve as a virtual analogue to the commuting one does when traveling from home to work and back, and teleconference worked for meetings conducted over either phone or video. The terms telehealth and telemedicine have emerged as doctor seeks ways to consult with patients in those instances that don't require direct examination.

Unless we find a solution, Mars explorers, even if they land on the surface, could be barred from stepping onto any zone that might harbor life, in which case they'll have no choice but to tele-operate rovers to do the everyday work of surveying and sampling.
— Tony Reichhardt, Air & Space, January 2016

Nantucket also uses tele-radiology, having Boston radiologists, some specializing in certain body areas, read X-rays and scans. It has used tele-pediatrics twice, for a child in a car accident and one in diabetic crisis.
— Pam Belluck, The New York Times, 9 Oct. 2012

As videoconferencing finds its way into other industries, tele- might see even more inventive use in the future.