Teeming means "in great abundance" and is used to describe things that are filled or overflowing, as in the phrase "a swamp teeming with fish and wildlife." The homophone teaming is related to team, and refers to "joining together," as in "friends teaming up to fix the problem."

Many people find that they have trouble distinguishing between words that differ by a single letter, even if the meanings of these word are quite distinct. A fine example of an often-difficult pair is team and teem. If you're someone who has never had a moment of doubt or hesitation about these two words, well, bully for you. For the rest of us here is a short explanation for how to differentiate between them. 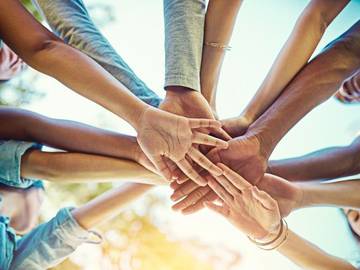 Each of these words has a number of meanings, spread across multiple parts of speech. The meanings which are most often mixed are “to become filled to overflowing” (teem) and “join forces or efforts” (team), especially when found as teeming and teaming. When one of these words is employed incorrectly it most often seems to be teaming used where teeming is called for.

My thoughts then drift to warmer days of spring and summer with green grass between our toes, birds chirping and calling in the fields around us, lakes and streams teaming with fish and the sights and sounds of a good thunderstorm dropping much-needed rain.
— Dan Ackerman, The Bismarck (North Dakota) Tribune, 18 Jan. 2018

St. Vincent is a lush, volcanic island with magnificent rain forests and waterfalls, while the Grenadines are coral islands with pristine beaches and reefs teaming with life.
— The Globe and Mail (Toronto, Canada), 7 Sept. 1996

In many cases, two such similar words may be distinguished by the prepositions which follow. However, both teeming and teaming are often followed by with; "teeming with" refers to a setting in which there is an abundance of something (life, people, fish, etc.), and "teaming with" refers to the action of joining together with others. Teeming is occasionally found used in an adjectival manner (“teeming masses”) in a way that teaming would not be (you are unlikely to have reason to write of the “teaming masses”).

As a way of cementing in your mind the difference between these words, we present you with an example of each one used in splenetic 17th-century prose. Because if you can figure out the snitty usage of the 1600s, today’s examples should give you no problem.

Teeming with (“in great abundance”):

… as will by their unanimous Acknowledgment of the unalterableness of the Succession (as has been lately done in Scotland) assert the Sacredness of the British Monarchy; by their Care to put a Stop to the Debauchery of the Press, whose prolifick Womb, daily teeming with new Monsters, fills every Corner of the Nation with Seditious Pamphlets, will take away those continual Incentives to Rebellion.
— Anon., Britanniae Speculum, 1683

Teaming with (“joining together”):

… he in those unhappy times, and all such adle brain Church Projectors were with Child, teaming with their own sacrilegious Bastard-brats or false conceptions how to Usurp the Lawes of God and Man, and to rob God most colourably.
— F. B., The Character of Sr. Arthur Haslerig the Church-Thief, 1661