Know what you’re getting into and where it’s been, etymologically

Despite competition from Uber and Lyft and other ride-share apps, taxicabs remain ubiquitous sights in a lot of major cities. Motorized taxicabs first appeared on city streets in the U.S. at the beginning of the twentieth century, with the Checker Motor Corporation, founded by Morris Markin in 1922, eventually becoming the exclusive manufacturer of the iconic taxicab seen in just about every New York-set movie and TV series in the 1970s, including Taxi Driver. 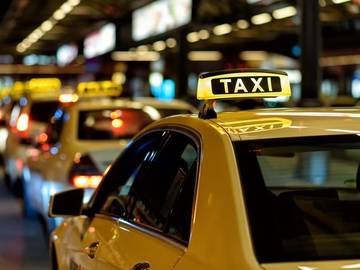 You probably knew that last one.

Kennicott gave up hope of adequate credit for being a traveled man, and telephoned to a garage for a Ford taxicab, while Juanita kissed Carol and made sure of being the first to tell the latest, which included seven distinct and proven scandals about Mrs. Swiftwaite, and one considerable doubt as to the chastity of Cy Bogart.
— Sinclair Lewis, Main Street, 1920

When you need (or needed) a ride, you could hail a taxi, or you could hail a cab. The two words, in this context, mean the same thing. But cab is not short for taxicab; rather, it comes from cabriolet, which in its original use referred to a two-wheeled, one-horse carriage with a leather hood that folded down. These carriages were rented out for hire. Now also commonly encountered as a type of convertible automobile, cabriolet derives from French and is so called from its light, bounding motion—it’s also related to the word caper, as well as cabriole, a type of ballet leap.

(The cab that serves as part of a truck—where the driver sits and operates the controls—is not related to cabriolet. This word instead is a shortened form of cabin, a term from railroading that refers to the compartment of a locomotive that houses the engineer.)

The taxi half of taxicab, meanwhile, comes from taximeter—that’s the device that calculates the amount of a fare based on the distance that has been traveled and that, unnervingly, always seems to tick up faster than you think it should. Taximeter derives partly from German and partly from the Medieval Latin taxa, meaning “tax” or “charge.” Thus, a taximeter-cab was a car for hire outfitted with such a device; when we refer to the car as a taxi, we’re using a shortened form of taxicab, which is already a shortened form of taximeter-cab.

"If I may be allowed to say so, madam, I think that there must have been trouble at Mrs. Bannister's. A telephone-call came from her very early this morning for Mrs. Winfield which caused Mrs. Winfield to rise and leave in a taximeter-cab in an extreme hurry. ..."
— P. G. Wodehouse, The Coming of Bill, 1919

Taxi also exists as a verb, though we’re more likely to use it when we’re already at the airport than when we’re looking for a car to get us there. When an airplane taxis to the runway, it proceeds at low speed along the ground. That sense comes from the use of the noun taxi to refer to a small passenger airplane. So you can taxi to the airport (in a taxi) and you can taxi to the runway (in the plane), though if the driver of the former doesn’t step on it, you won’t be flying anywhere.