It's that other most wonderful time of the year: the time when the United States unites in a state of anxiety and perplexity as its inhabitants attempt to file their taxes. For those who want a break from snapping pencils and pounding calculators with a hammer, we’ve put together a short piece about the origins of some common tax words. 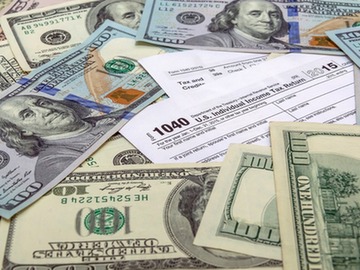 No one is certain where the phrase "nothing is certain but death and taxes" comes from, but it's been around since the early 1700s.

Death and Taxes
Where did the phrase "nothing is certain but death and taxes" come from? As with many popular expressions, the origins are shrouded in mystery. However, we have evidence that it was in use in the very beginning of the 18th century:

You lye, you are not sure, for I say, Woman, ‘tis impossible to be sure of any thing but Death and Taxes,---therefore hold your tongue, of you shall both be soundly whipt.
—Christopher Bullock, The Cobler of Preston, 1716

Then it would be no more a Proverb or a by-Word among us, that there is nothing sure, but Death and Taxes.
—Daniel Defoe, Fair payment no spunge: or, some considerations on the unreasonableness of refusing to receive back money lent on publick securities, 1717

Tax
The word tax has been causing consternation and depleting bank accounts since the 14th century, which is when it was first used to mean "to exact money from." Until that point, it meant "to place a value on." It comes from the Medieval Latin taxare, meaning "to tax, assess."

Mortgage
Perhaps you have a mortgage, which would certainly be a salient factor to note when filling out your returns. You may forget the pain of doing taxes once you learn that this lovely word comes from two Old French words meaning "death" and "pledge"—or you may not.

Audit
How about audit? Surely, if you find yourself being audited, you can take comfort in the fact that this word shares its roots with audible and auditorium (from the Latin audire, "to hear"), as the earliest use of the word referred to a hearing at which a company's books and records were examined.

Conjubilant
Conjubilant means "shouting together with joy." What does this word have to do with taxes? Absolutely nothing. But you’ve just waded through a list of words on a topic most people hate, and a small and incongruous ray of linguistic happiness seems in order. Consider it a refund.