No need to stress.

One of the occupational hazards of lexicography is being subjected to accusations of linguistic laxity. Because dictionaries record the language as it's used as opposed to protecting it from supposed error, sticklers will assume that any time two words are confused in print, the dictionary rushes to codify the error. We must, they cry, give error no slack, but keep the ropes of correctness taunt!

Alas for the ropes, they are kept taut, not taunt. 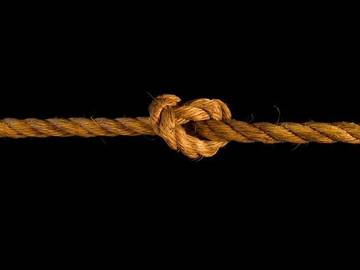 Ha ha, your rope has a knot in it.

Taut came into English in the 15th century from Middle English. Its earliest uses refer to something being stretched to the limit—a taut mouth crammed with food—and then to bulging muscles (as opposed to flab). The familiar "tightly drawn" sense appeared in the 1500s:

When that Phoebus flees the Bow whose string is bent so tought.
— George Turberville, trans, The Eglogs of the Poet B. Mantuan Carmelitan, 1567

Taunt, unlike taut, hasn't changed meaning much since it first appeared in written English: it has always referred to teasing or making fun of something. We can't be certain who its lexical ancestor is, but our etymologists posit it's from the medieval French verb tenter, which means "to try" or "to tempt." The noun appears before the verb, but just barely: they both show up in English in the early 1500s.

Go to now master marchaunt / There is a reason that gyuyth you a taunt / I trow more than you can answere well. [Go to, now, master merchant / there is a reason that giveth you a taunt / I believe you can answer it well.]
— John Rastell, Of gentyles and nobylyte, ca. 1527 To turney or to tante with me ye ar to fare to seke. [To tourney or to taunt with me, you have the right to seek]
— John Skelton, Poems against Garnesch, 1529

It seems like the two words shouldn't be confused: one is an adjective (taut) and the other a noun and verb (taunt). One clearly refers to things that are tense (bowstrings), and the other refers to making things tense (family functions). One has an n in it, and the other doesn't. Yet you can find evidence, even in carefully edited sources, of things being "stretched taunt," or of guitarists strumming "taunt strings."

Taunt is most often substituted for taut: rarely does the error occur the other way 'round. There are three possible reasons for the error:

How can you remember which stressful word to use? One mnemonic you can use is to remember that neither tight nor taut has an n in it, so if you are thinking of a "tightly stretched" rope, or "tight and firm" muscles, you'll want taut. If you're still not sure, or are afraid you'll get the mnemonic wrong, you can always look each word up in a dictionary.