'Tantalizing' comes from a Greek myth about eternal frustration. Because a modern audience expects instant gratification, we'll tell it to you real quick.

The more familiar you are with Greek mythology, the less likely it is that you will find tantalizing to be an appealing adjective. 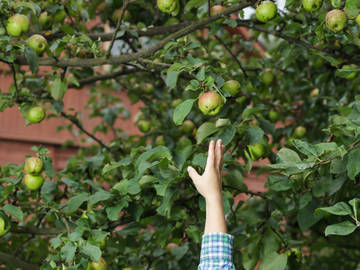 Unable to reach the apple, doctors flocked to her side daily.

Tantalize ("to tease or torment by or as if by presenting something desirable to the view but continually keeping it out of reach") is one of a healthy number of English words which have sprung from characters in Greek mythology, and, as is so often the case in such circumstances, the word does not come from a particularly happy story. It is an eponymous word, taken from the name of Tantalus, a king of ancient Phrygia (or Sipylus), who made the mistake of gravely offending the gods. The way in which Tantalus offended the gods differs from one version to the next; sometimes he was said to have merely shared their secrets with humans (almost always a big no-no in Greek mythology), and other times was said to have sacrificed his own son, Pelops (also not strongly recommended, if you want to have a happy ending in a Greek myth).

Although the transgression committed by Tantalus may vary from one story to the next, the supposed punishment suffered by him is generally consistent: once dead the king was forced to stand in a pool of water, with fruit hanging just over his head. The water would recede every time the king tried to take a sip, and the fruit would lift away every time he reached to take a bite.

Tantalize appears to have been adopted into English around the end of the 16th century, with what is currently the earliest known use coming in a poem by Robert Tofte.

Ah doo not still my Soule thus Tantalize,  But once (through grace) the same imparadize.
—Robert Tofte, Laura, The Toyes of a Traveller, 1597

In the early uses tantalize was primarily employed to refer to not just effecting desire in a person, but in doing so while keeping the object of that desire just out of reach.

Be not, girle, asham'd.  These are acquainted with it. I would vex'um  To night with the remembrance of those sports  We shall enjoy, then pleasures double rise  When both we feed, and they shall Tantalize.
—Thomas Randolph, The Jealous Lovers, 1632

So, when thou dost the avaricious finde,  With quenchlesse-thirst of gold thou fir'st their minde.  Who, still the more they have, doe crave the more,  And, Tantalize in midst of copious store.
—Richard Brathwaite, The Last Trumpet, 1635

What shall I doe my love? me thinkes mine eyes  Behold thee still, yet still I Tantalize.
—James Day, A New Spring of Divine Poetrie, 1637

In modern use one will occasionally find tantalizing used in a fashion that strays a bit from its etymology, meaning the protagonist gets to eat the fruit (although it is still much more common to find the word used to refer to things that remain out of reach).

....a party at a nearby table was served a tantalizing array of Chinese hors d'oeuvres from a teak lazy Susan, equipped with a tiny grill for further delicacies....
—Pat Dougherty, The Democrat and Chronicle (Rochester, NY), 30 Mar. 1980

Tantalize is not the only word in English whose meaning is connected to the punishment suffered by a person who offended the gods in the myths of ancient Greece. Sisyphean ("requiring continual and often ineffective effort") comes from Sisyphus, a king of Corinth who was awarded the punishment of having to eternally roll a stone up to the top of a hill, at which point it would always slip from his grasp and roll to the bottom. Greek Gods really knew how to dish out a punishment.