'Tally' and 'Tabulate': It All Adds Up

Whether you're using sticks, slates, tables, or Excel

English has a number of verbs pertaining to counting; two that might at first glance look related are tally and tabulate. Both were used frequently by the U.S. news media as reports of vote totals came in during the 2020 presidential election. 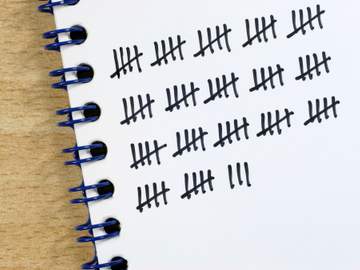 We might just be lexicographers, but you can trust our math.

Tally is traced to the Anglo-French verb tailler ("to cut, measure, or count"), as well as the Latin noun talea ("plant cutting, thin piece of wood"). In the Middle Ages, a tally was a wooden stick marked with notches that represented the amount of a debt or payment. Such sticks were even used in Medieval England by the Exchequer for the collection of taxes.

The verb tabulate also appeared in reports of votes being counted:

At about 8 p.m., Secretary of State Jocelyn Benson announced all of Michigan's votes had been tabulated. Counties were in the final stages of reporting them out for the canvassing process to begin, she said.
— Beth LeBlanc, The Detroit News, 4 Nov. 2020

That leads to Nevada, whose six votes could clinch victory for Biden. The Silver State also will be tabulating ballots for days, but its outcome could be known before Pennsylvania and other states that are still counting, Arizona and Georgia.
— Bill Dentzer and Colton Lochhead , The Las Vegas Review-Journal, 4 Nov. 2020

Tabulate is defined two ways in Merriam-Webster Online: "to count, record, or list systematically" and "to put into tabular form."

Tabular is defined as "of, relating to, or arranged in a table specifically : set up in rows and columns," like the way we often think of a computer spreadsheet nowadays. Both tabulate and tabular derive from tabula, the word for a tablet or slate.

In the 1880s, American Herman Hollerith invented what was called a tabulating machine, an electric device that processed information stored on punch cards. Hollerith's invention was used in counting and expediting the results of the 1890 U.S. census. The success of his machine launched Hollerith's entrepreneurial career, and he used the word tabulating in the names of his companies.

It's from such use that tabulate might be considered a more appropriate verb than tally for situations involving complicated methods of counting that might require the assistance of a machine or computer. But the comparison between tally and tabulate and their histories offers an interesting overview of the different means we have used to keep track of quantities—whether by sticks, slates, punch cards, or Microsoft Excel.