Going above and beyond

The adjective superb means “marked to the highest degree by grandeur, excellence, brilliance, or competence.” It’s an adjective of praise for that which is exceptional:

It will shock no one familiar with Jia’s work to hear that Zhao, his longtime on-screen collaborator (and off-screen wife), has given another superb performance.
— Justin Chang, The Seattle Times, 3 Apr. 2019

And Pitt is superb, striding through the movie with the offhanded confidence of a mountain lion who knows his turf. This is swagger freed from self-consciousness; Cliff was groovy before the word was invented.
— Stephanie Zacharek, Time, 22 May 2019

Superb is related to super, but the b at the end of superb is not the result of any alteration made to super. So how did we end up with this distinct adjective that is only a single letter different from super? 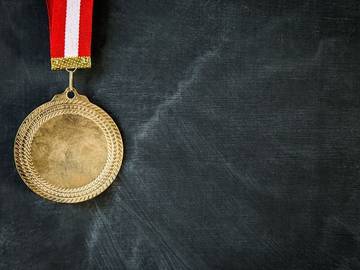 First, let’s look at super itself. In English it serves as an adjective (“did a super job”); an adverb (“a super funny guy”); a prefix with any of a number of meanings indicating that which is above and beyond what is ordinary (“supermoon”; “a hero’s superpowers”); and a noun formed by shortening any of several words prefixed by super- (such as "superintendent").

In Latin, super is a part of speech different from all of those—it’s a preposition meaning “above” or “over.”

Superb derives from the Latin superbus, which means “excellent” or “proud” and is formed by combining super with the Latin element –bus, essentially a form of “to be.” The word is sometimes translated as “haughty.”

Examples and Usage of 'Superb'

Early uses of superb described things such as buildings or monuments that were magnificent or imposing:

From the highly-carved oaken roof hung a superb chandelier of gilt bronze, formed like a spread eagle, whose outstretched wings supported three male and three female figures, grasping a pair of branches in each hand.
— Walter Scott, Kenilworth, 1821

When describing a person, superb could mean “haughty” or “arrogant,” a meaning held by the French superbe. When used to describe language, it could mean “grand” or “stately,” perhaps with a suggestion of superiority:

The procession passed under a lofty arch, which had been purposely erected: but in less than seven years, the Gothic conquerors of Rome might read, if they were able to read, the superb inscription of that monument, which attested the total defeat and destruction of their nation.
— Edward Gibbon, The History of the Decline and Fall of the Roman Empire, Volume 3, 1781

Superb could also describe negative things that are far from excellent, astounding in their limitlessness:

I was armed with the regular club with which the boat-pullers killed the wounded seals gaffed aboard by the hunters. It was only a foot and a half long, and in my superb ignorance I never dreamed that the club used ashore when raiding the rookeries measured four to five feet.
— Jack London, The Sea-Wolf, 1904

Modern use of the word has neutralized its meaning to a generalized term meaning “very fine” or “excellent”:

He was a superb student, never making lower than a B throughout high school, and he should have been chosen for the National Honor Society at the end of his sophomore year, but the teachers wouldn't nominate him because of his behavior.
— John Feinstein, A Season on the Brink, 1989