Straight can mean "without bend," "heterosexual," and "fairness," while strait means "narrow, strict, or constricted." This is why "strait" is the original spelling of "straitjacket" and "straitlaced." Given that the imagery of a straitjacket and straitlaced person reflects being upright or following a narrow path, they are often conflated as "straightjacket" and "straightlaced."

We know straight to mean "having no curves, bends, or angles," "heterosexual," and "exhibiting honesty and fairness," among other things. We likewise know that strait refers to a narrow passage of water between two land masses, and also "a situation of perplexity or distress," such as the phrase in dire straits ("in a bad or difficult situation"):

Hammer is in dire straits, according to the San Francisco Chronicle. The paper states that Hammer's yearlong tour in support of Too Legit to Quit lost money and that the building of Hammer's multi-million-dollar Fremont, California, home is "stalled while Hammer pays contractors."
—Michael Goldberg, Rolling Stone, Nov. 26, 1992

So why are they so often confused in words such as straitjacket and straitlaced? 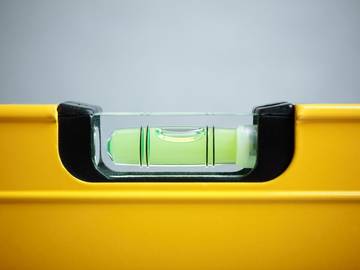 Strait also serves as an adjective with now-archaic senses, including "strict or narrow," "rigorous," and "closely fitting or constricted." These words originated from the "closely fitting or constricted" sense of strait, but they are spelled straightjacket and straightlaced frequently enough that these spellings are listed as variants at their respective entries in the dictionary.

One reason for the variant spellings might be due to interpretation. A person wearing a straitjacket is essentially forced into a straight position, and straight carries a connotation of discipline—not deviating from a path, as opposed to wandering astray—that could encourage the spellings straightjacket and straightlaced.

Another example of this conflation turns up in the phrase straight and narrow, defined as "the way of propriety and rectitude." The phrase originates from the Bible; specifically, the King James Version, Matthew 7:13-14:

The gospel is referring to a small opening into "the way" that is narrow. But the interpretation eventually shifted to straight and narrow, with straight implying a regimen of clean living:

Edgar Robbins drank too much and was a fool about the women, but Ward and Gertrude took him around with them everywhere and confided in each other that they wanted to straighten him out. Then one day Robbins took Ward aside and said that he had syphilis and would have to follow the straight and narrow.
—John Dos Passos, The 42nd Parallel, 1930

Surprisingly, the words are not etymologically related. Straight ultimately derives from the Old English streccan, an ancestor of our word stretch. Strait, meanwhile, derives via Middle English and Anglo-French from the Latin verb stringere, meaning "to draw or bind tight." From stringere we also get the words strict and stringent.

And that's as straight an explanation as we can give you.