What Is the Plural of 'Still Life'?

When you're not pluralizing lives, but paintings.

The plural of the noun life is lives, as in "the private lives of the rich and famous" or "the firefighter saved the lives of the two trapped passengers."

But what is the plural of the work of art (as in a painting or photograph) known as a still life? 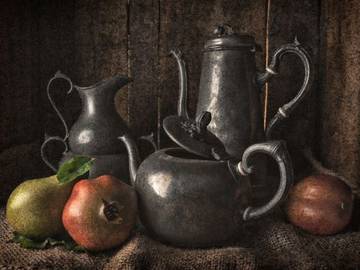 And how do you capture such nuanced shadows?

Twenty percent of the money the Hog Bristle Painters make selling their portraits, landscapes and still lifes at The Barn cultural center in Mariemont in February will benefit La Soupe.
— Jeanne Houck, The Cincinnati Enquirer, 21 Jan. 2019

These examples follow the accepted standard. Even though it ends in life, still life takes a regular –s plural: still lifes.

So why doesn't the plural for still life follow the same pattern? The reason might be best explained as one of semantics rather than grammar. A way to consider the question is to look at how other nouns that end in life are pluralized.

The noun afterlife, for example, usually (but not always) gets pluralized as afterlives:

"The Good Place," created by Michael Schur (who was also behind the shows "Parks and Recreation" and "The Office"), imagines the afterlives of four humans who, on balance, lived mostly average lives on earth.
— Laura Turner, The Washington Post, 26 Jan. 2019

All children love the country, the flowers, the sward, the birds, the butterflies; or if some do not, despair, O Philanthropy, of their afterlives!
— Edward Bulwer-Lytton, What Will He Do With It?, 1858

Some writers prefer to give it the -s plural:

Then there’s the noun lowlife ("a person of low social status or moral character"), for which we show the -s plural as preferred and the form lowlives as accepted but less common:

Stories about Buscemi tend to riff on his looks as if he were some sort of weaselly hybrid of Don Knotts and Quasimodo, mistaking him for the lowlifes and scumbags he often plays on screen.
— Chris Nashawaty, Entertainment Weekly, 5 Mar. 2005

Then there are other compounds to consider:

There is food, of course, and, needless to add, munitions. All these things have shelf-lives and are regularly sold or other-wise used, while fresh materials are added.
— John McPhee, La Place de la Concorde Suisse, 1983

This city doesn’t stop, it has one of the liveliest nightlives in the country, and it tends to explode when the big fest rolls around.
— Noé Cugny, Offbeat, 10 May 2018

While there is certainly variation, the usual tendency is for afterlife, nightlife, and shelf life to take the same plural formation as life, whereas still life and lowlife tend to be treated as their own independent animals, pluralized with -s (with the occasional appearance of lowlives).

In afterlife, nightlife, and shelf life, one finds compounds that do not stretch too far semantically from at least one sense of life. An afterlife is, in a way, a kind of life, or at least comparable to the "period from birth to death" sense of life. Nightlife employs the "human activities" meaning of life. Shelf life refers to the "period or duration of something" meaning of the word.

But a still life is not a kind of life, nor a measurement of living, nor a projected aspect of life. It's an artwork that just happens to end in the word life. Our instinct for carrying over the standard plural for life in afterlife, nightlife, and shelf life doesn’t feel right when we are pluralizing paintings, nor people of a certain character, as we do when we pluralize lowlife as lowlifes. Hence we parse still life without regard for its relationship to its component life, and so treat it with the regular -s plural. (This may be the reasoning behind the San Francisco Examiner writer's use of afterlifes, in that the repurposing of buses might not have been comparable enough to the "period from birth to death" sense of life to keep with that word's plural.)

It is this same logic of distance from a word's original semantic meaning that allows us to say that a batter flied out to left field rather than flew out: although we are fine assigning the irregular past tense form flew to what birds and airplanes do and figurative extensions thereof ("we flew through the presentation"), there is enough semantic distance between that and what a batter does to a baseball to consider the latter as its own item, to be considered on its own terms, and then conjugate it its own way.