The Secret History of 'Staycation'

Our language is always changing: new words come in, older words slip out, hidden words come to light. But few people realize that it’s not just the language that’s changing: our access to the record of that language is changing as well. 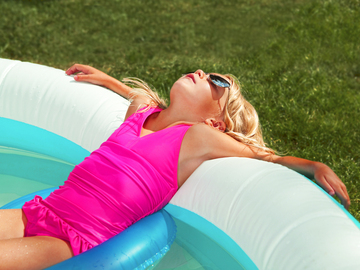 Though 'staycations' were previously considered a recent phenomenon, new research shows that the term dates back at least as far as 1944.

There’s no better example of this than the process of finding new dates of first written usage. Before the rise of the Internet, each of the dates you'll find at an entry were found sometimes by chance, sometimes by following a hunch, usually by looking in other, older dictionaries. Now, however, we have access to literally hundreds of thousands of new sources in which to find those elusive first dates of usage. Just as language isn’t static, neither are these sources.

Recently, one of our editors had reason to look at the backing for the word staycation. This is a word that we entered into our Online Dictionary in 2009; at the time, we had traced the word back to 2005:

They call it a "staycation"—a vacation where you stay at home and don't vacate to anywhere else.
—Huntsville (Alabama) Times, 3 Apr. 2005

This little tidbit of knowledge ended up informing many people’s views of the word staycation. Some wrote in to complain that we shouldn’t have entered this horrible new portmanteau; others wrote thinkpieces about why we take staycations or whether the staycation trend (for surely, if the word was just entered into the dictionary, then there must be a trend afoot) will last. The assumption was that because the word staycation was new, that the thing must be new, and like many new trends, staycations have their detractors.

In the few short years since we entered staycation and researched its date, however, more material has been scanned and uploaded to a wide variety of online archives. In looking through one, our editor found this:

Take a Stay-cation instead of a Va-cation, this year.
—Cincinnati Enquirer, 18 July 1944

This is the earliest written use we currently have for the word staycation. It was found in a list of “Red-White-And-Blue Reminders” for the month of July—a list that also mentioned Victory gardens and the importance of writing letters to soldiers on the front. Was this in a thoughtful editorial written by an editor supporting the war effort? No: staycation and the list it appeared in were found in a full-page ad for Felsenbrau Supreme beer.

This new date is likely to surprise many people, in part because it means we might need to revise our view of staycations. How can one disparage something that might have originated as a wartime effort to save gasoline at home? Are there other uses of staycation between 1944 and 2005 that might shed light on the thing itself? What new thinkpieces must be written on the staycation?

The antedating of staycation by 60 years is quite a coup, but one that will play out again and again as more information becomes accessible to lexicographers.