You won't find the word Jedi in the dictionary but you will find a definition of Sith, kind of

It’s no surprise that much of the terminology of Star Wars is particular to that fictional universe and not to be found in any earthbound dictionary. We’ll have to leave it to the superfans to argue over the etymology of Midi-chlorian or the orthography of the Wookiee home world (three y’s in Kashyyyk). However, there are still many words from Star Wars for which information can be found in Merriam-Webster. 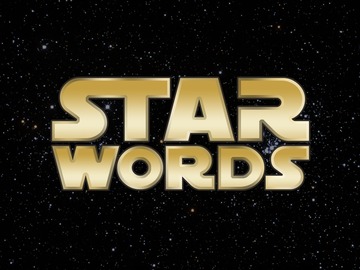 Some are rather obviously borrowed with historical precedent in mind. Stormtroopers, the entirely white-armored soldiers of the evil empire, would appear to have taken their name from the storm troopers of early-20th century Germany. Although the most often associated with the armies of Germany in the Second World War, the word has been in use in English since February of 1918 to refer to certain German troops.

There are also words from Star Wars that are somewhere between real and invented, such as when Han Solo famously declared of his ship “You’ve never heard of the Millennium Falcon? It’s the ship that made the Kessel Run in less than twelve parsecs.” A parsec is a unit of measure in interstellar space (equal to 3.26 light years). Han Solo appears to have been employing it rather loosely, using it to refer to time, rather than distance.

Other words from these films are in fact English words, but in a seemingly accidental way. Sith—the name given to an order of malignant beings—is coincidentally also an archaic variant of the word since. “I’ve got it! Let’s name the archvillains after a Chaucerian adverb!” said no one ever—not even George Lucas.

And of course, the Star Wars universe has done a considerable amount to popularize one word in particular: droid. Droid was in use prior to the original Star Wars movie, albeit in limited fashion. The earliest known use of the word is from a story by Mari Wolf, in a science fiction magazine from 1952: “They’re stopping robots in the streets—household Robs, commercial Droids, all of them.” (Robs as a shortened form of robot still hasn't caught on.)

Droid is nothing more than a shortened form of android, which is a word with a surprisingly longer history than most science fiction words. The earliest known use coming from 1657, in a book by Gabriel Naudé, The History of Magick, in which he makes reference to an Androides (an automaton resembling a human) that was made by Albertus Magnus.

Most of us will not be concerned with the origins of Star Wars jargon while watching the movie. But as legions of committed science fiction fans surely know, the only thing more enjoyable than the film itself is arguing about it afterwards. Now you have a suitable comeback if some would-be Padawan tells you that George Lucas invented the word droid.