The Battle of 'Stanch' vs 'Staunch'

Don't let a "u" get in the way of proper usage.

Staunch and stanch are both variant spellings of the same word, but each is more common in different scenarios. "Staunch" is seen more often as an adjective meaning "substantial" or "steadfastly loyal," while "Stanch" is more often a verb as in "to stanch the bleeding."

Have you ever asked yourself, am I misusing stanch or staunch in some way? If this question was in response to profuse bleeding, please go to the hospital. For all others, relax, we have the answer to your question and it is a resounding ‘maybe?’

Some pairs of commonly confused words, such as flout and flaunt, have meanings, histories, and recommended forms of use that are clearly distinguished from each other. Stanch and staunch are not such words. 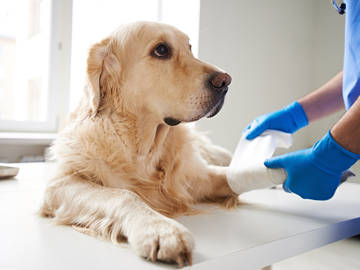 A good medical professional will help you stanch the bleeding, regardless of your usage.

Origin of Stanch and Staunch

Both stanch and staunch come from the French estancher (which has the same meaning as stanch: “to check or stop the flowing of”). Both have been in use for many hundreds of years. And most dictionaries will list them as having the exact same meaning. So what is the purpose of that infernal, superfluous U in the middle of the word? Was it placed there by a cruel and mirthless god, one who finds grim satisfaction in our despair? Or was it placed there by one of the trickster gods, who delight in our endless capacity for orthographic doubt?

Neither - these words are really just variants of each other. There is, however, a catch (there’s almost always a catch): one of these words is more commonly used as an adjective, and the other one is more commonly used as a verb. Staunch is more often found as an adjective (it has several meanings in this role, including “watertight,” “substantial,” and “steadfast in loyalty or principle”). Stanch more often will be found used as a verb.

Please note that saying that something is more commonly used in some fashion does not necessarily mean that people who choose to use it in the less common fashion are wrong. There is a considerable body of evidence of staunch and stanch being used in their less common roles, taken from reputable sources.

Although Dr. Dewling was always an end-of-the-pipe waste-management man, as Commissioner he has become a stanch supporter of open-space preservation and repeatedly warned of a “quiet crisis” if the state did not take steps to protect its natural resources.
—Bob Narus, The New York Times, 19 Jun. 1988

Surgeons say growing numbers of amateur chefs are reporting to accident and emergency departments with what they are calling "avocado hand"; serious stab and slash injuries that are the result of failed attempts to penetrate the fruit's hard outer casing with a sharp knife before encountering a resistant inner stone. The British Association of Plastic, Reconstructive and Aesthetic Surgeons is calling for safety labels on the fruit to staunch the flow of injured patients to hospitals.
—Gurpreet Narwan, The Times (London, UK), 10 May 2017

A joint investigation carried out by the Star and the CBC, however, shows that the previous Conservative government helped corporations avoid paying their fair share by turning a crackdown into a loophole, and the new government has done nothing to staunch the bleeding.
—Marco Chown Oved, Toronto Star, 17 Jun. 2016

Some people will tell you that you should always keep these words apart, and if you’d like to do this you may find the following sentence of some assistance in helping you to remember the difference: “A staunch friend would help me stanch my bleeding leg, and not spend all his time guzzling cocktails.”

Alternatively, you may rely on the time-honored method of people-who-remember-things-poorly, and use this limerick:

Tho’ neither stanch nor staunch must conform
To rigid semantical norm
Some editors will blanch,
When encountering stanch
If it’s used in adjective form